Home » Days Of The Week And Months In Farsi
other

Days Of The Week And Months In Farsi

Days Of The Week And Months In Farsi

How much do you know about the Persian calendar? Or days of the week or even months in Farsi? How about the weekend days in Iran?

Well, the Persian calendar or even weekend days are totally different from those in most of the world.

You are not possibly familiar with these difference; that is why we are here to give you the answer. 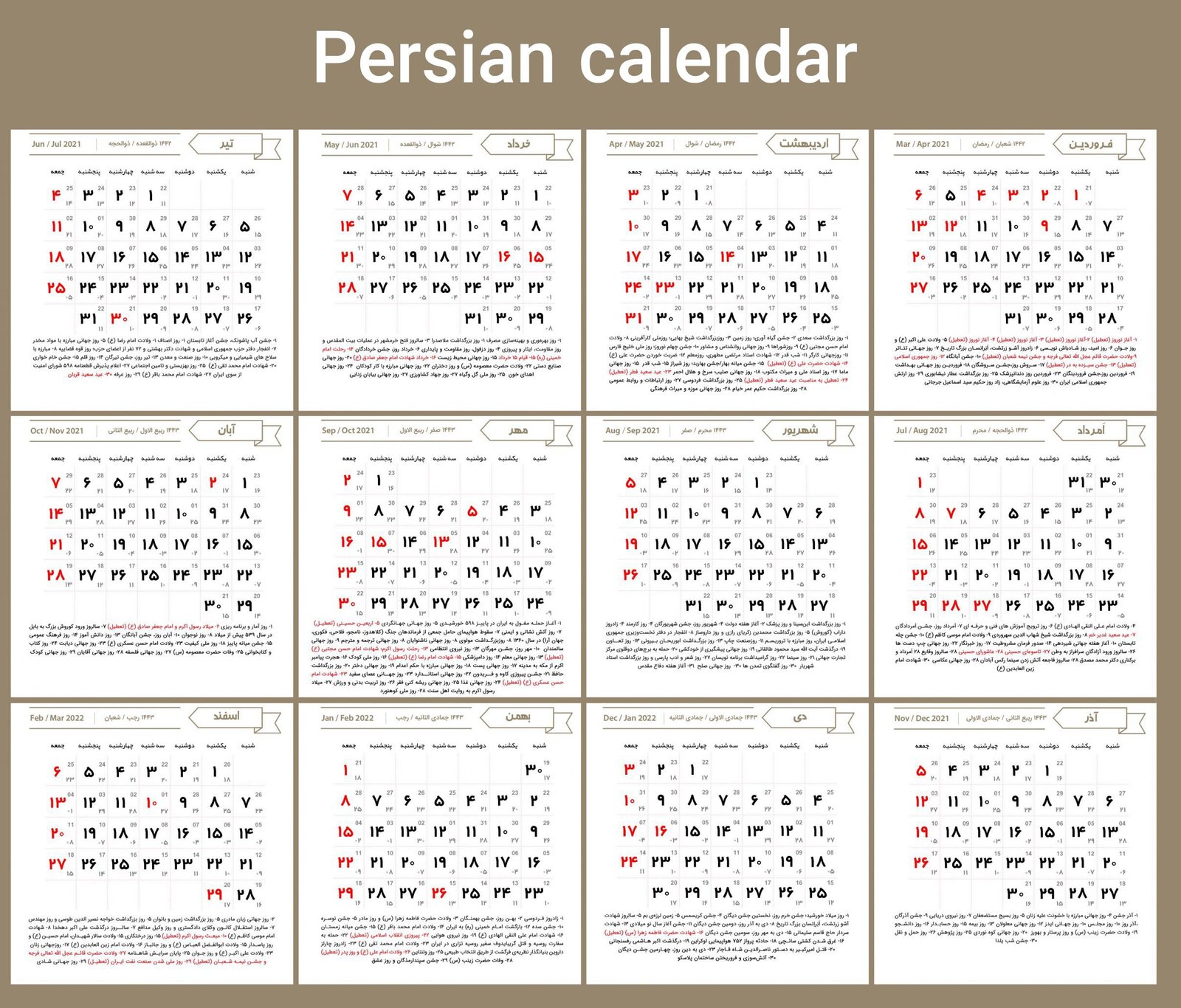 What Is Persian Calendar?

The Solar Hijri calendar is the official Persian calendar.

According to the law approved on March 31, 1925, Solar Hijri became the official calendar of Iran; before that time, people would use the Lunar calendar; but Reza Shah in the Pahlavi dynasty changed it to the solar calendar.

The migration of the prophet Muhammad from Mecca to Medina is the beginning point of this calendar.

Solar Hijri is one of the most accurate calendars of all time and is calculated through the Sun’s rotations.

It is based on the 365-day seasonal year, which is how long it takes the Earth to circle once around the Sun; The Egyptians were the first people who developed this calendar.

The year starts in Iran at midnight, closest to the vernal equinox—specifically, at the Iran Standard Time meridian at longitude 52.5° east, roughly 250 miles east of Tehran.

Nowroz, or the first day of spring, is the beginning day of persian calendar, and Iranians around the world celebrate it. While since 1925, the Solar Hijri has been official persian calendar; Afghanistan used this calendar in 1957.

What Are the Benefits of Persian Calendar?

In terms of astronomy and nature, the Hijri solar calendar is one of the world’s best and most accurate calendars.

Some of the reasons are:

The beginning of the Hijri calendar year coincides with the anniversary of the birth of spring and the beginning of nature’s rebirth, which is a fascinating fact.

What Is the Difference Between the Solar Hijri Calendar and the Lunar Calendar?

A solar year has 365 days, but the Lunar calendar has nearly 354 days in a year, so there are 11 days of difference between these two calender.

Muslims and Jews use the Lunar calendar mainly, which is crucial for them because of religious purposes.

Also, their religious festivals are according to this calendar.

People who use a lunar calendar add an extra month (13th) every three years since there is an 11-day difference between solar and lunar years.

While in the Solar Hijri calendar months change according to the orientation of the Sun, in the Lunar calendar, they alternate according to moon phases.  Moon phases are new moon, half, and full moon.

What Is the Difference Between the Persian Calendar and the Gregorian Calendar?

The Gregorian calendar is the most widely used in the world. Pope Gregory XIII declared it as a revision of the Julian calendar in 1582.

Just like the Hijri calendar, Gregorian has 365 days and 12 months. But there are some differences between them as:

While the beginning of the Solar Hijri calendar was the immigration of Prophet Muhammad, the birth of Jesus was the beginning point of the Gregorian calendar.

While the Solar Hijri is used in the Middle East, The Gregorian calendar is widely used in Christian countries like European countries or USA.

So, it seems that countries use calendars according to their official religions.

Which Countries Use the Gregorian Calendar?

As we mentioned earlier, the Gregorian calendar is the most widely used in the world.

While some countries like Iran, Saudi Arabia, Afghanistan, etc., don’t use this calendar, most other countries have accepted the Gregorian calendar as their official one for a long time.

Here are some of the countries that use this calendar:

And so many other European or American countries accepted the Gregorian calendar, mainly because their dominant religion is Christian.

Now that you know about the persian calendar, it is time to learn about the Persian days of the week and the months of the year.

Here are the weekdays:

The weekend in some other countries are alike; some of them are:

How Is Persian Months?

As we mentioned earlier, Iran’s Solar Hijri calendar has 12 months, which are:

These are the first three months of a new year, starting in spring.

These three are the three months of summer.

As you can see, each of the first six months of the Solar Hijri calendar consists of 31 days.

These three months mentioned above are in the autumn.

These three months mentioned above are in the winter.

As you can see, the second half of the year is 30 days except Esfand, which is usually 29 days but is 30 days every four years in a leap year.

Persian months and their equivalences in the Gregorian calendar

As the months are different in two calendars, their dates of the day also vary.

If you would like to learn more about Persian calendar and months, we prepared the Gregorian months and their equivalences in the Persian dates in the following section.

Now you that you know

As you can see, there are several differences between the Persian calendar and the calendars of other countries; nonetheless, it has always been this difference in Orient that attracts individuals.

10 Places You Should Visit in Tehran Province, Iran