Persian miniature paintings are classic, detailed, vivid, and tiny in size, usually portraying a mythical or religious topic. Due to its lengthy history, Iran has a rich artistic legacy, and miniature is one of them. “Miniature” originates from a French word that means “small representation of nature.” Persian miniature paintings differ significantly from what is famous in eastern Asia and Europe. The only resemblance between their painting and that of other cultures is that they are all tiny in size. There are also other distinguishing characteristics of Persian miniature paintings; the first is the abundance of delicate details; even though the paintings are small in scale, the artists have not overlooked the details, which draws the attention of every spectator.

What Are Persian Miniature Paintings?

The term “miniature” in Iran refers not only to a distinct piece of art but also to various illustrations for Iranian manuscripts, such as those seen on the margins of poetry collections. From the beginning of the 14th century, this kind of art has been more popular. Persian miniature paintings began as a devotion to adoring books and papers, but they eventually found their way to design magnificent buildings’ walls. The walls of monarchs’ palaces were ornamented with miniature art throughout the Ashkani and Sassanid empires in the pre-Islamic period.   When miniature art flourished during the Islamic period, the Safavid kings paid particular attention to miniature art. As a result, you can see many historical buildings with colorful and breathtaking Iranian paintings from this period if you visit Iran.

What Is the History of Persian Miniature Paintings?

Traditionally, historians trace back the origin of Persian miniature paintings to the efforts of the Sassanid Empire, which reigned over Iran from 224 to 651 AD and was the source of their inspiration. The art of this pre-Islamic kingdom combined very ancient Persian themes with more contemporary Hellenistic and Chinese methods and motifs to create a unique aesthetic. The latter was brought into the Middle East due to the Mongol invasions of the fourteenth century. As a result, legendary beasts in Persian miniatures are strikingly similar to those in Chinese paintings.

From the 13th through the 17th century, the Persian miniature flourished at its pinnacle. When it came to painting, the first “schools of painting” were in the city of Herat in modern-day Afghanistan, particularly during a period from the city’s conquest by the renowned Tamerlane. In the following, you will read about different eras of this art.

The primary center of art creation in the Ilkhanid era was Tabriz in present-day Iran and Baghdad in Iraq. During this period, the arts of the book, particularly illustrated miniatures of religion, were a primary aesthetic emphasis. Artists contributed new themes, including Chinese-influenced characteristics such as dragons and lotuses.

The Jalayirids were the rulers of western Persia. Under their rule, the Ilkhanid style of painting changed into a more serene miniature. Because the Jalayirids were fascinated by Persian poetry, the paintings that have remained from this era tend to show topics popular in contemporary poetry, such as battle scenes and heroic achievements.

Timurid monarchs were generous admirers of the book and miniature painting, and their vast patronage drew a large number of painters, architects, and men of literature to their realm. The eastern Islamic world developed into an important cultural center, with Herat, Afghanistan, serving as its capital.

Shah Abbas was the most famous of the Safavid monarchs, and he was also the most generous patron of the arts. Shah Abbas relocated his capital to Isfahan and expanded the city by building a new city alongside the old one. When it comes to miniatures, the lines become more calligraphic, the human figures get more fleshed out, and the painters choose a color palette of browns, purples, and yellows. If you go to Iran, remember that Isfahan is the center of Persian miniature paintings.

It’s worth mentioning that Persian miniature paintings have always had a solid relationship to the royal families, with their advancements and developments related to royal sponsorship and how supportive and encouraging the kings and their provincial governors were to the painters. Aside from the capitals of each time, various areas and places also saw and welcomed the rise of diverse schools of painting, with some of the most well-known of them being Tabriz, Shiraz, and Herat, among other areas.

What Are the Characteristics of Persian Miniature Paintings?

It’s possible to distinguish Persian miniature paintings from their Eastern equivalents by various aesthetic and symbolic features, representing their creative and philosophical viewpoints. Scholars generally agree that Persian painting reached its peak during the late 14th and early 15th centuries. According to Arthur Upham Pope, it was during these two centuries that a distinct style of Persian painting began to take shape. In the following, we will introduce you to the three main important characteristics of the Persian miniature. 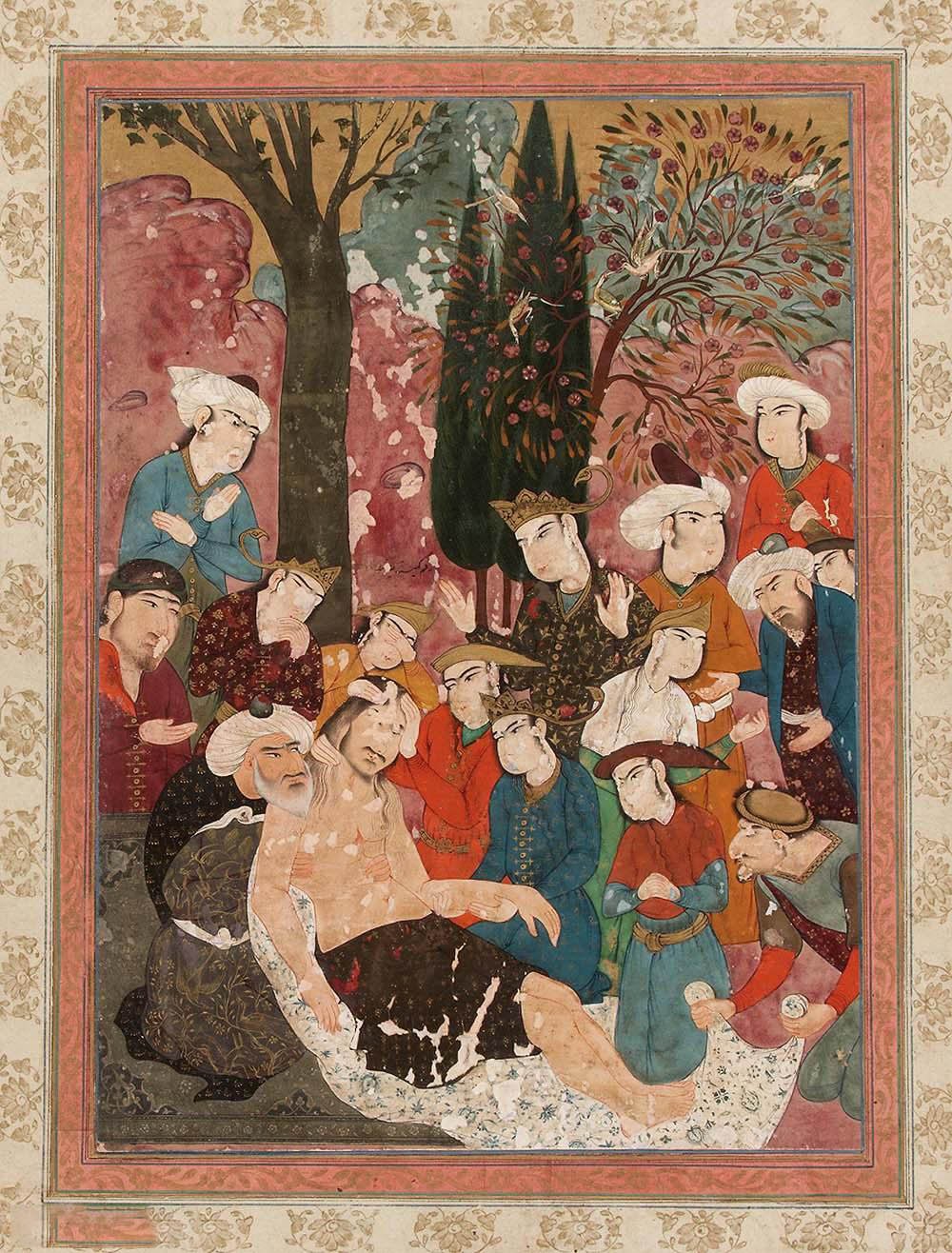 Because of the Sufi tradition and its system of thinking, Persian miniatures are free of any specific location or time, which gives them a transcendental nature that makes them attractive for religious and secular purposes alike. Even if paintings show objects like the moon, stars, or even the sun in the sky, indicating day or night, they have no discernible influence on the rest of the work since there’s no play of light and shadow in the composition. Using a distinct frame (with a different hue of sky and vegetation) inside the piece, the Persian painter has even managed to construct two parallel timelines in certain instances. 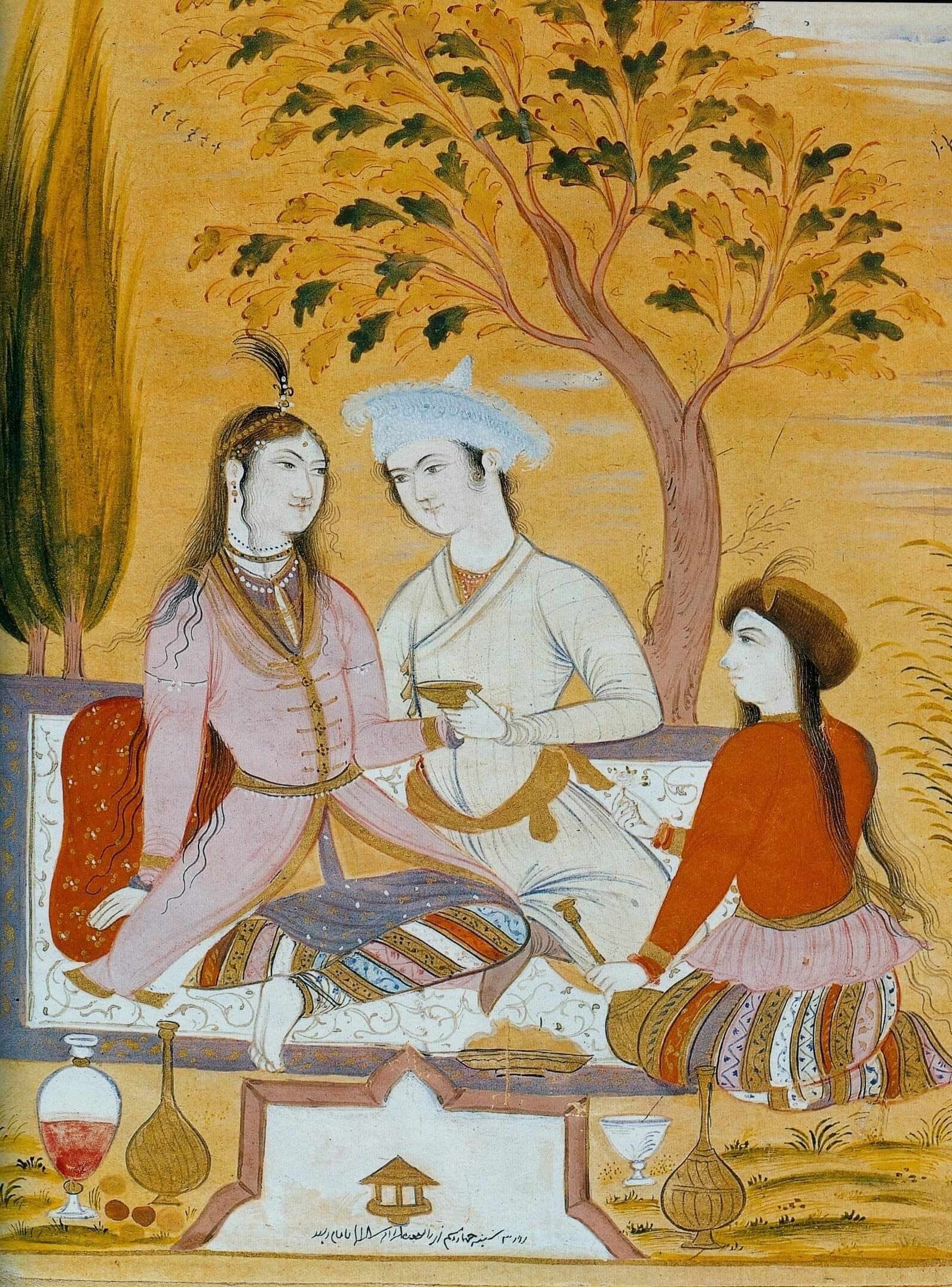 Both male and female characters are dressed identically, with their clothing covered in rich colors and at times embellished with delicate designs. Sometimes, it’s impossible to tell them apart from one another. The presence of headdresses is one of the characteristics that aid the audience in differentiating between the two. While females often dress delicate scarves and beautiful crowns, males typically dress a variety of hats made from the skins of various animals. 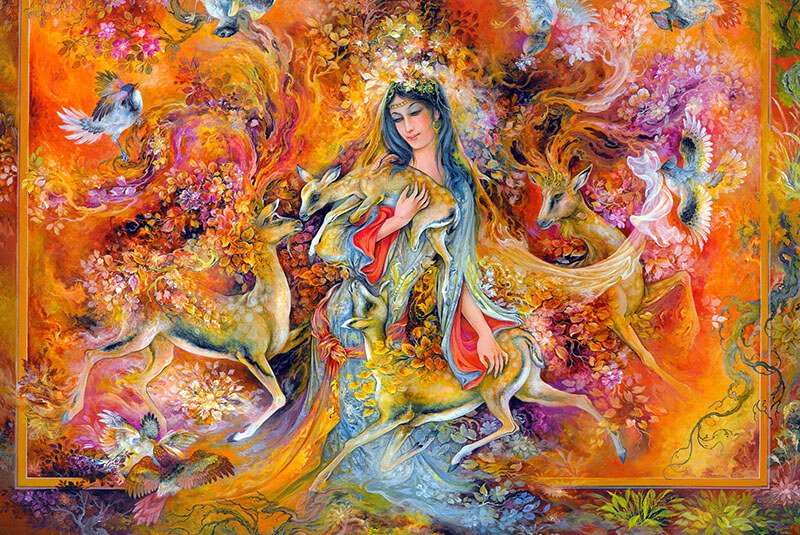 One of the most impressive features of the persons shown in these paintings is the perspective of their physical parts, which is unique. Most of the time, while painting hands, they draw the thumbs at a safe distance from their counterparts’ resting positions, and they paint the hand with a delicate, dance-like fluidity throughout. When seen from a profile angle, the feet are clearly visible in full detail. Furthermore, while viewing the composition as a whole, it’s possible to see that each component (a castle, plants, or gardens) is from various views and perspectives. Egyptian art, in particular, shows a similar effect in that the human figure and other visual components are from a variety of viewpoints, each from a slightly different precise angle. 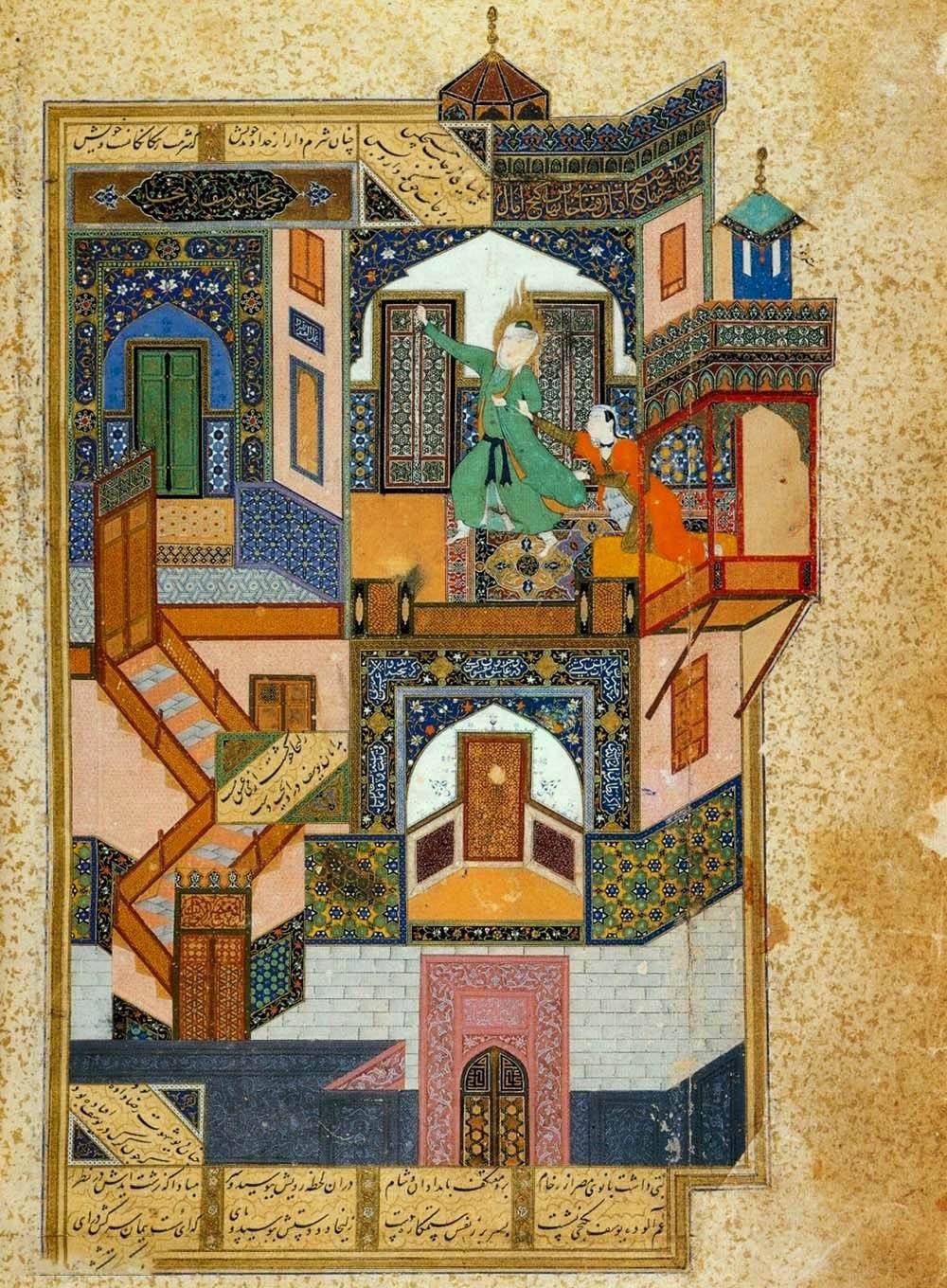 He was a student of the great miniature painter Mirak Naqqash. Soon, Behzad quickly developed the distinctive style that distinguishes him from the others. The talented and delicate brush of Behzad brought life and movement to Persian miniature, allowing it to lose much of its rigidity and formality and injecting it with a degree of reality and drama. Behzad switched the subject matter of his paintings to ordinary life and did works that were almost soul in their movement, in which individuals flowed freely. Since the late 15th century until the early 16th century, during the Safavid dynasty, Behzad not only oversaw the royal libraries but also had a large number of pupils and followers who replicated his style of painting. 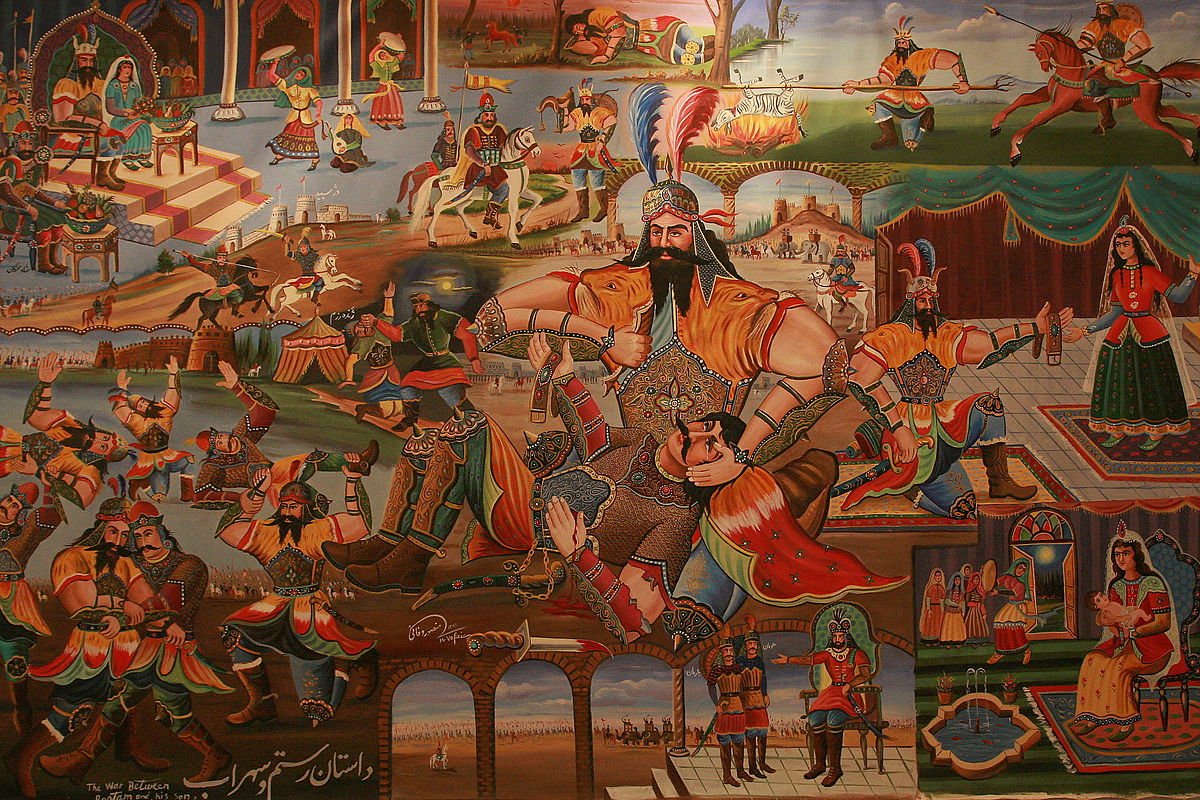 Following his years of service under the patronage of Shah Abbas the Great, the king awarded him the title of “Abbasi” in the early seventeenth century. Even though he spent a few years away from the royal court and art while occupying himself with lowly activities, Aqa Reza was “one of the most innovative figures of the age. Because of his stylistic developments during his career, along with using novel topics like semi-naked ladies and meditative sheiks and dervishes, he also took a fresh approach to painting methods. 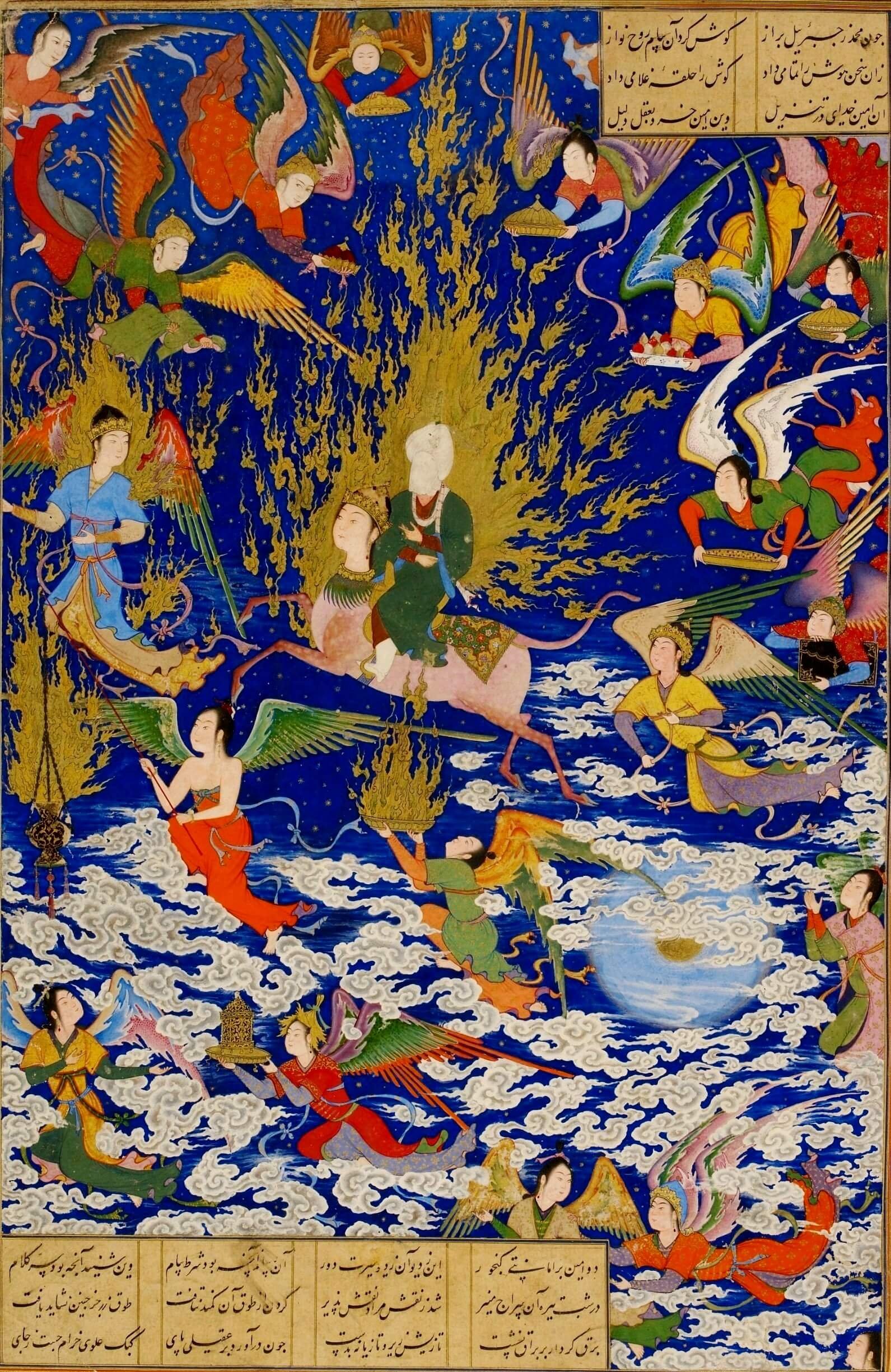 A notable artist of the 16th century is Sultan Muhammad, who worked in the Tabriz school of painting and enjoyed not only the works of Behzad but also the Turkmen school of painting. Sultan Muhammad’s Persian miniature paintings are well-known today. There is little information about his life other than the fact that he worked in the atelier of Shah Ismail I (r. 1501-1524) and that he had numerous students, one of them was Tahmaps I.  Furthermore, many of his students worked both individually and at the royal palaces and ateliers, where they produced some of the most exquisite and detailed artwork.

Iran has always been the home of many famous and talented artists throughout history. One of the main reasons several tourists visit Iran each year is to observe the unique Persian paintings. Iranian artists are famous for their miniature paintings; That’s why we provided the famous Persian miniature paintings in this article.