Home » Top 10 Dishes of Iran You Should Try!
Cooking

Are you looking for different and exotic tastes but incredibly delicious dishes? We recommend Iranian dishes. If you have ever met Persians, there’s a good chance that they have brought up the subject of Persian foods and encouraged you to taste them. It isn’t easy to turn down the most wonderful dishes on offer, especially when they’re rich in spices. Iran is a nation in which each region has its own distinct cuisine; For example, fish dishes from northern Iran, close to the Caspian Sea, are copious. On the other hand, Spicy cuisine is quite popular in the south because of the warmer environment. Persian cuisine is renowned for its distinctive ingredients. Even though most recipes involve a significant amount of preparation and cooking time, they’re very nutritious and have really unforgettable flavors.

What Are the Best Dishes of Iran to Try?

Dishes of Iran is famous for its Persian history and hospitality, and it relies on the preparation of the most delicious foods with just a few basic materials. Iranian food originates in the Middle East; however, the cuisine of this area has been greatly affected by nations such as turkey and Russia. Usually, Iranians place a high value on food. Family events typically entail various hot and cold meals, never-ending berenj (rice) portions, and lots of encouragement to continue eating more.

If you haven’t had the opportunity to experience Persian foods, you should look for a Persian restaurant in your area and order one of the following dishes of Iran; it’s a must-try for anybody who enjoys eating. If you’re interested in learning more about Persian cuisine, check out our list of the top 10 dishes of Iran. 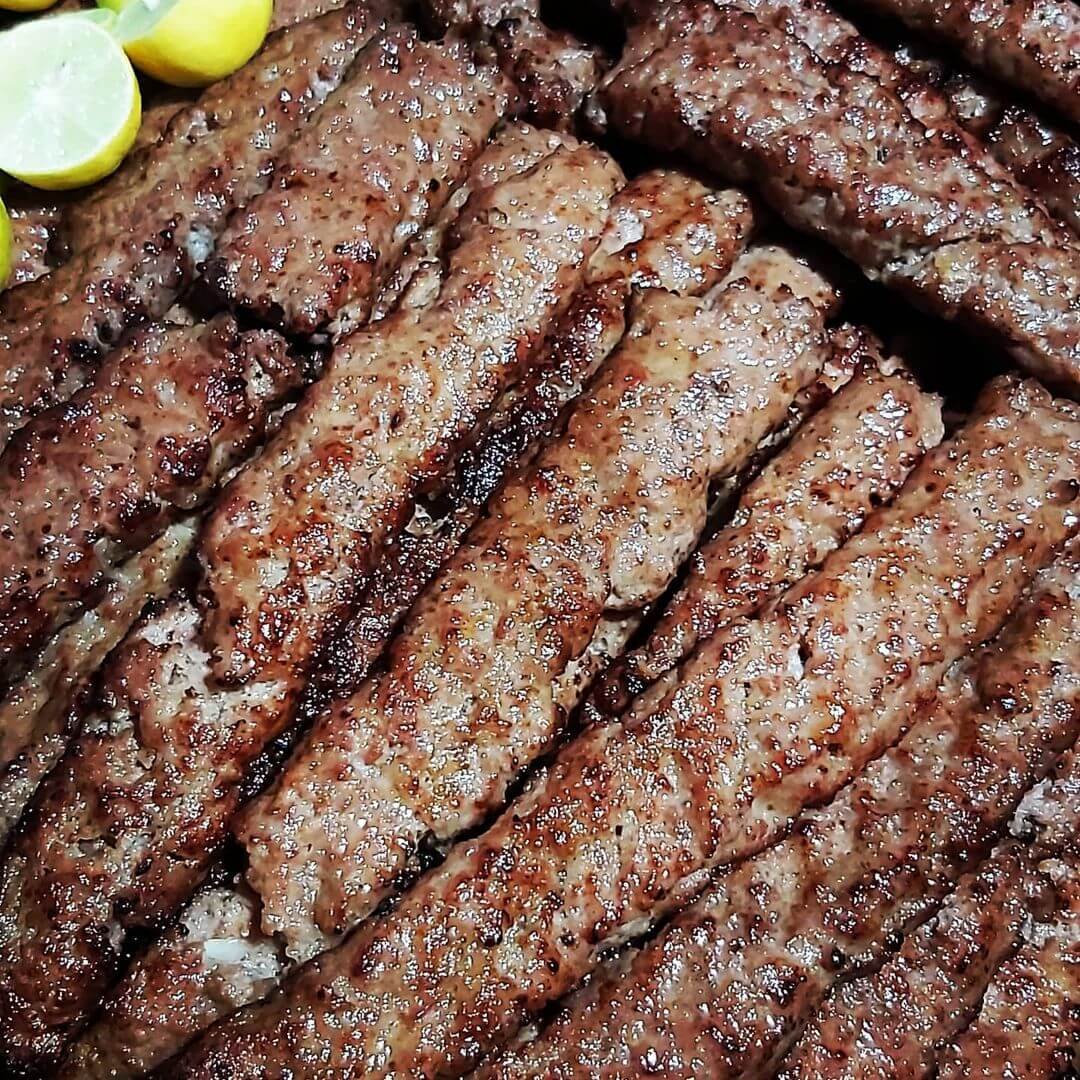 It’s served with steamed rice and is one of the many different forms of Iranian kebab; chelow kabab is a traditional Iranian meal. It’s often famous as Iran’s national dish and probably provided its recipe during the reign of the Qajar dynasty. Persians serve Chelow kebab with a variety of accompaniments, including butter, sumac powder, basil, onions, and grilled tomatoes. They usually serve Chelow kebab traditionally with doogh, an Iranian yogurt-based drink. 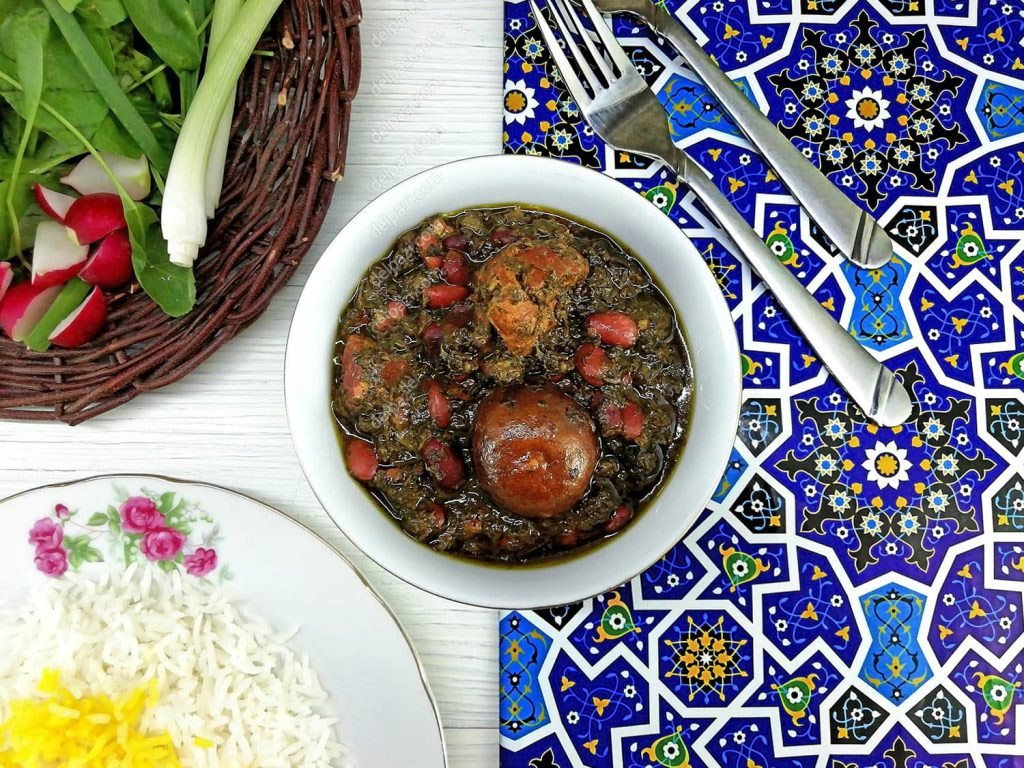 Ghormeh Sabzi is among the most beloved dishes of Iran. It’s a must-try for anybody interested in tasting the country’s diverse flavors. It’s a tangy and flavorful slow-cooked stew (khoresht) prepared with herbs, red kidney beans, and pieces of lamb. The basis of the stew is parsley, coriander, chives, and fenugreek, with the addition of Persian dried limes for a mild, sour flavor. Of course, steamed rice is the perfect accompaniment to this dish. Instead of the bigger pieces of meat seen in most other Persian stews, Persians usually cook this Khoresht with tiny lamb or sheep cubes (though you can also use beef). Gheimeh is the term used to describe the technique of chopping the meat into small pieces. Persians cook this Khoresht with lamb (or beef) and split chickpeas in tomato sauce with different spices such as turmeric and cinnamon. A yummy and flavorful stew is the end product. In Iran, several areas have their unique versions of this meal. In particular, Gheimeh Sibzamini, which they serve with crispy potato chips on top, and Gheimeh Bademjan, which is fried eggplants instead of crunchy potato chips on top, are two of the most popular options. 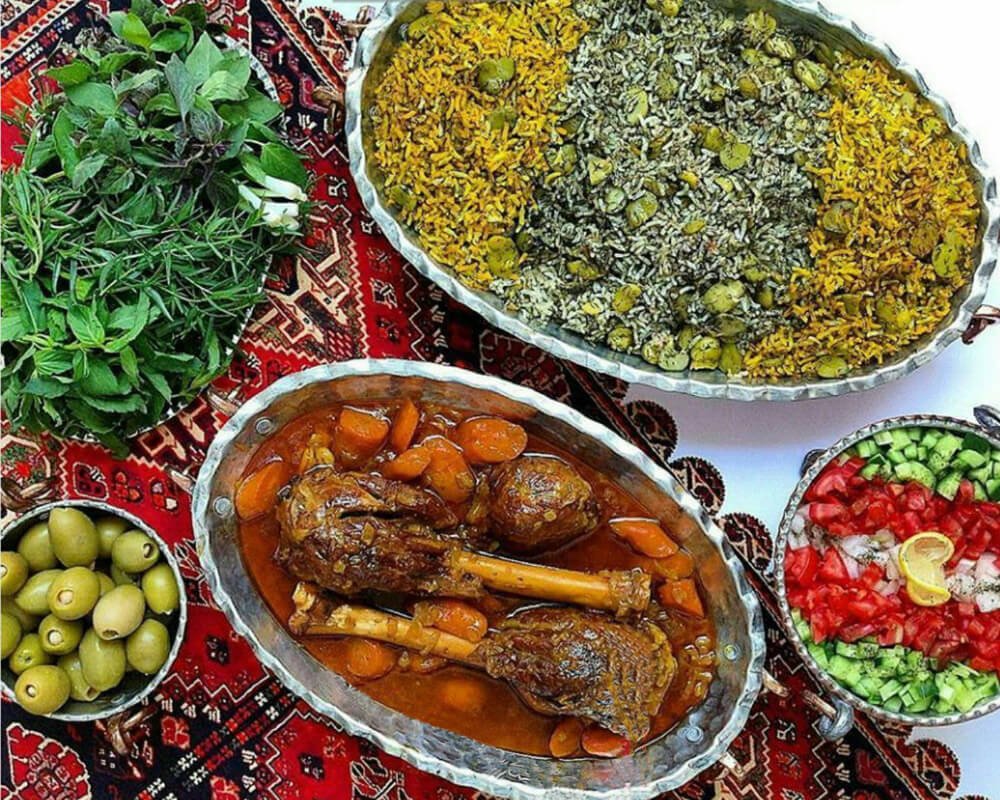 Baghali Polow is a delicious rice dish prepared with broad beans, dill, and saffron. They serve the plate accompanied by luxurious, Mahicheh (lamb shank). The roots of this meal, which is one of Iran’s most famous and well-known dishes, may be traced back hundreds of years. Among the dishes of Iran, Baghali Polow ba Mahicheh is a luxury food. 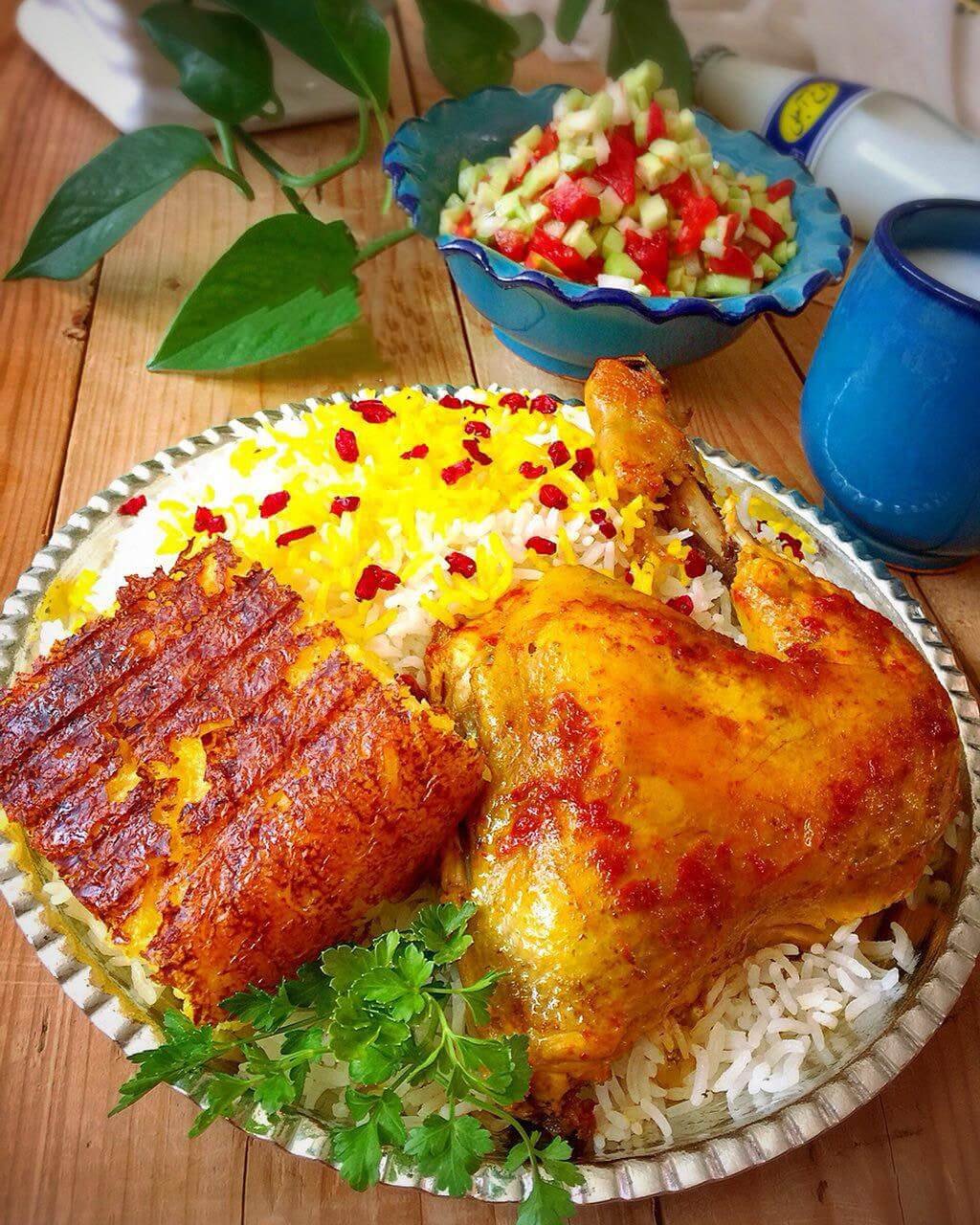 Among the most popular dishes of Iran, Zereshk Polo is one of the most well-known. Barberry rice is a traditional dish that Iranians serve hot with chicken (Morgh). Classic flavors like saffron, turmeric, and barberry combine to give this dish its distinctive taste. This traditional rice dish is full of dried red berries. In this dish, Iranians cook the rice with a large amount of butter, which helps to moderate the acidity of the berries. 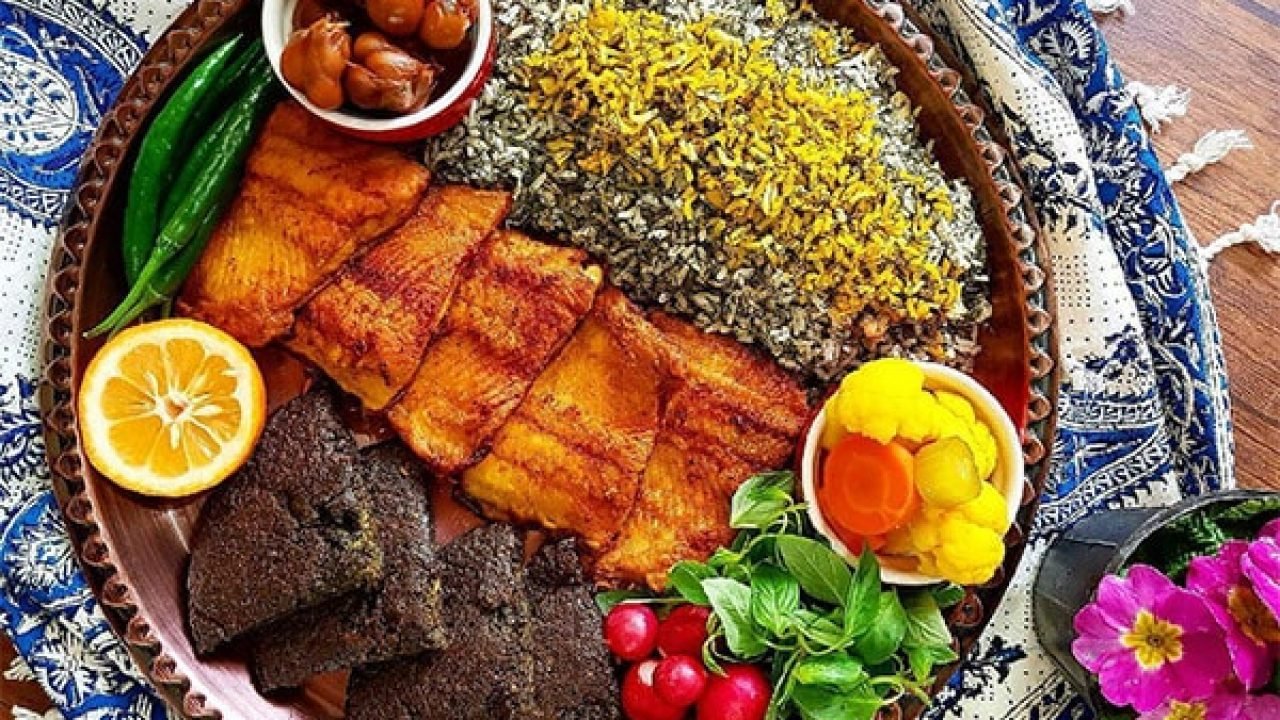 The word Sabzi Polow, which roughly translates to “herbed rice,” refers to the different green herbs – such as dill, coriander, and parsley – that are abundantly incorporated with the rice to produce this meal. Typically, Persians enjoy serving it with fish. Persians serve this dish traditionally with fried fish, known as Mahi, especially in northern Iran. Norouz is the most popular time to have this dinner (Iranian New Year). 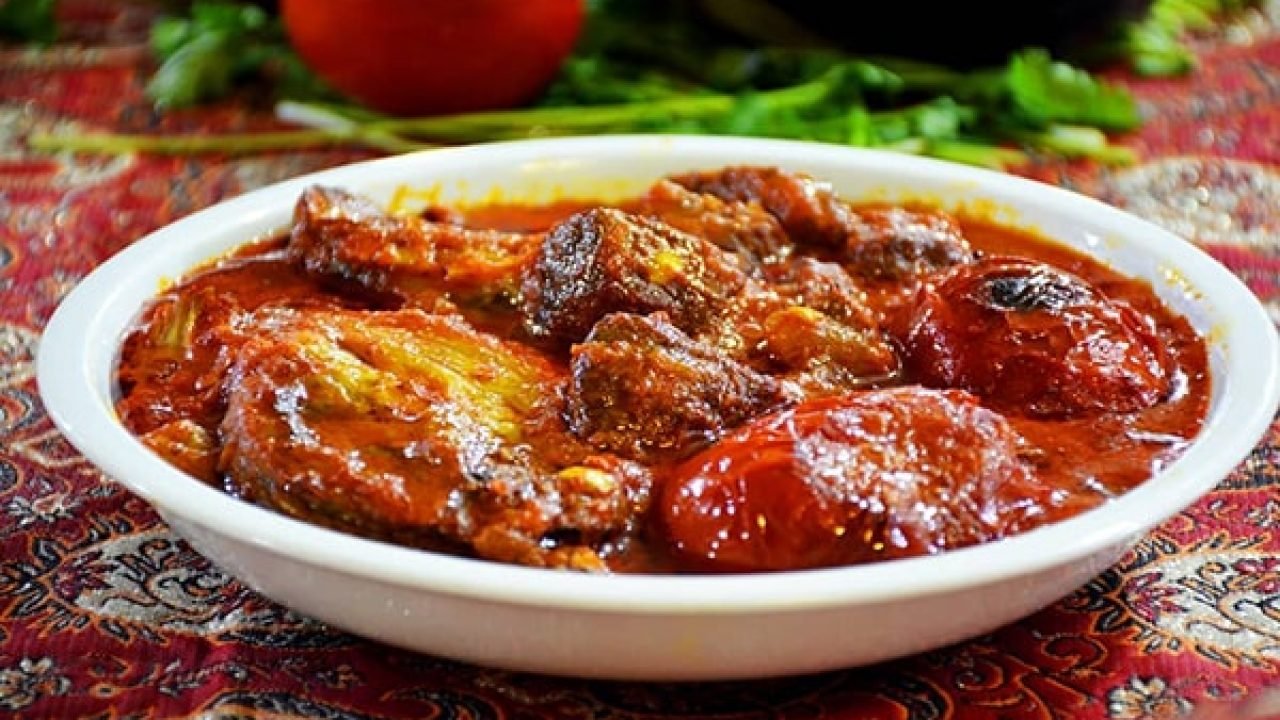 In its most basic form, Khoreshte Bademjan is an Eggplant and Tomato stew, cooked with the richness of tomatoes prepared with turmeric and a shimmering coating of oil on top and Lamb or Beef in it. The slow cooking process in dishes of Iran ensures that all of the components in the stew unleash their flavors. Iranians serve this stew with rice, and it has a mild sour taste that is because of adding lemon juice while it’s cooking. 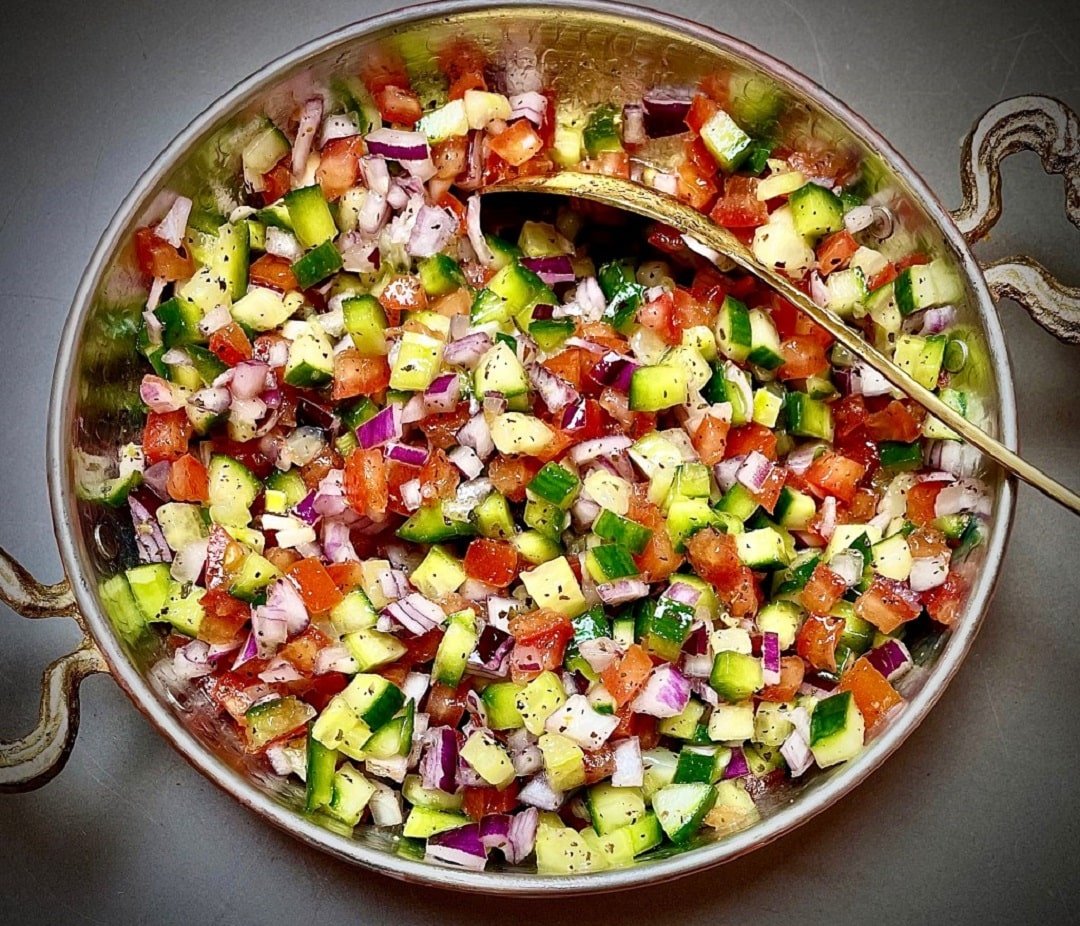 Having Salad Shirazi with many dishes of Iran, especially Ghormeh Sabzi, is a must. As you can undoubtedly guess, this salad originates from Shiraz. What makes it unique is that people chop all the components, cucumbers, onions, and tomatoes, into extremely tiny, finely cut bits. You can use olive oil and lemon juice for dressing that makes the taste even better. It’s simple to make and tastes wonderful! 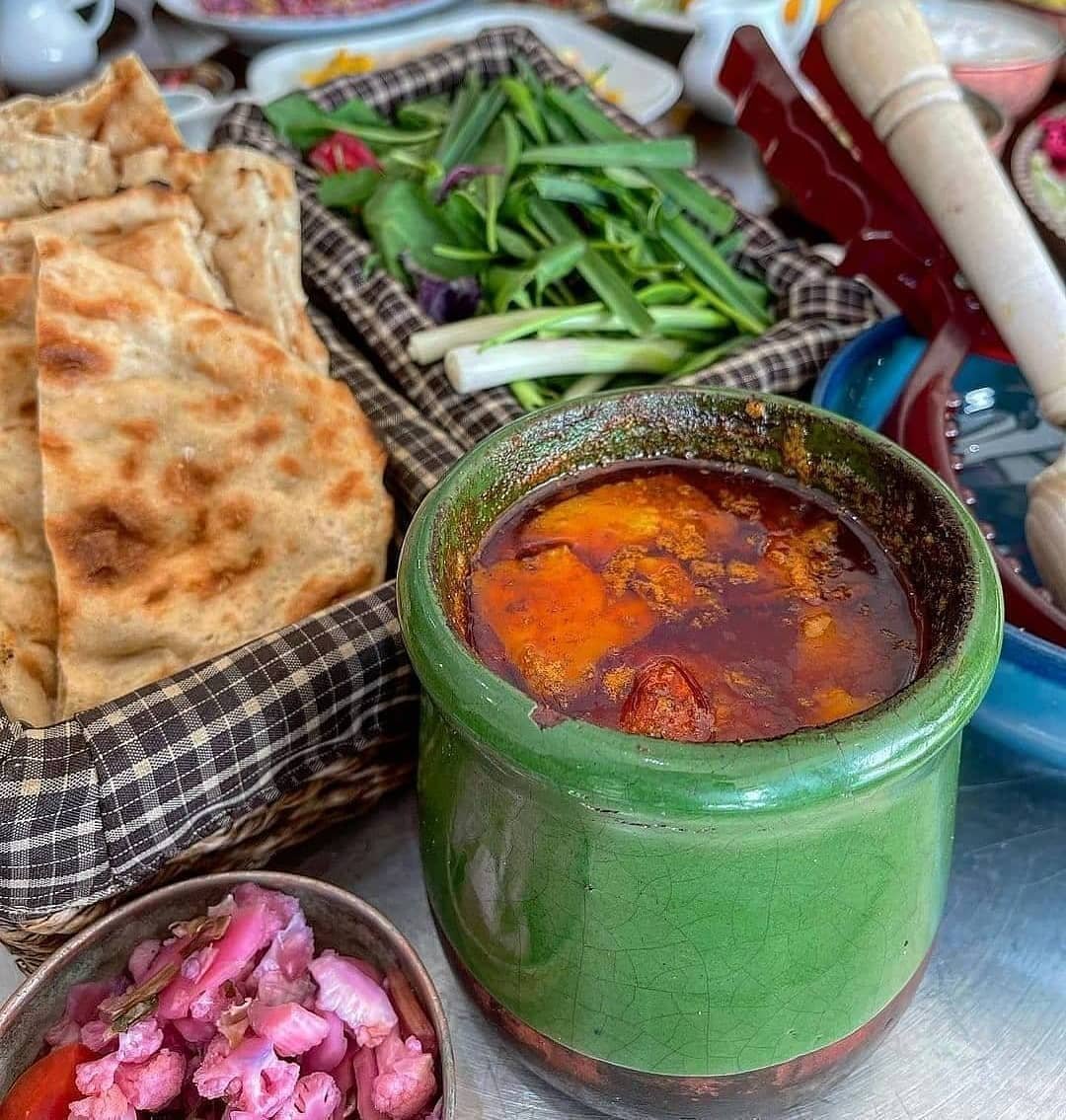 Dizi or Ab Gosht, which translates as meat water, goes back to the early 16th century. Ancient Iranians used Ab Gosht for workers and the poor class, but it’s a luxury dish at restaurants today. It’s customary for the Iranians to cook the traditional Dizi carefully in a clay pot to properly mix the flavors of the meat and herbs for a rich taste. To prepare this meal, they use chopped potatoes, too. If you want to eat like ancient Iranians, soak up the liquid with bread and then blend the meat and potatoes together, then eat it with bread, onion, and fresh greens on the side. 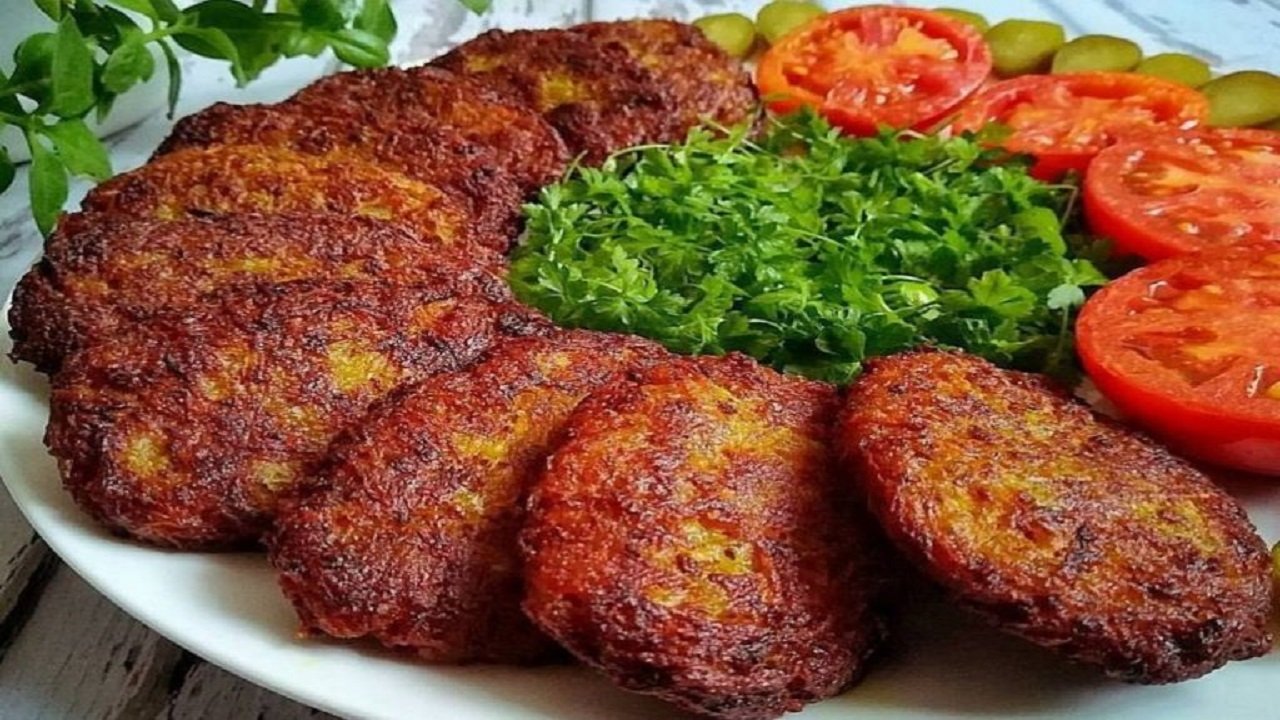 Kotlet is a delicious dish that Iranians eat with either bread or rice as an aside. It’s ground beef patties mixed with grated or mashed potatoes, onions, and spices to create a delicious popular dish. Then they cook Kotlet in a pan till they have golden brown Kotlets. Iranians usually serve this dish for dinner. Some use it as an appetizer, while others consume it as a complete meal. In addition to minced chicken thighs and breasts, they may prepare Kotlet using ground beef. To make the dish tastier, have some French fries and tomato sauce.

It’s simple to see why Iran’s native cuisines are so diverse when you look at the country’s geographical location. Historically, Iran had borders with the former Soviet Union nations, Afghanistan, Pakistan, the Arab states, and Turkey.  Now that you’re more familiar with the dishes of Iran, we recommend you find a Persian restaurant where you live or search the recipes because preparing the dishes we introduced is pretty easy.