Home » Top 11 Best Poker Movies Of All time
other

Poker is not a game; it is a lifestyle! Pro poker players and poker fans know what I’m talking about😉. Poker has been around since God knows when and has been used in movies for the extent of drama it can create. Poker is a synonym for gambling. Gambling is dramatic because it involves so much risk.

Where To Watch Poker Movies?

Apart from movie theaters where you legally watch Hollywood movies, some online platforms also legally operate and allow you to watch the latest movies about poker and other genres. IMDb and Netflix are paid movie streaming where you can watch as many poker movies as you want as long as you pay the subscription fees. These platforms are excellent places to read movie reviews, ratings, and details about each movie. But a little heads up, you may become addicted to Netflix and ruin your school or even love life! Trust me, I’ve been there!! So, make sure to set a limit for yourself.

10 Best Poker Movies You Should Watch!

Of course, it is only possible to watch some movies produced in the history of Hollywood about poker. Yet, I can break down the list to the best ones to watch, enjoy, and learn new stuff about poker. Following is a list of the best and new poker movies to watch.

This is one of the latest movies about poker. The movie is a narrative about William Tell, an ex-military interrogator turned professional gambler seeking revenge on an enemy from his past. He learns how to count cards during his eight-year sentence in USDB prison.

“Poker is all about waiting.” This is my favorite quote from the movie. Do you remember in the beginning, I said poker is a lifestyle? This is what I mean by that. It teaches you to wait until the right moment. The Card Counter is about poker, risk, guilt, retribution, patience, and how America operates. 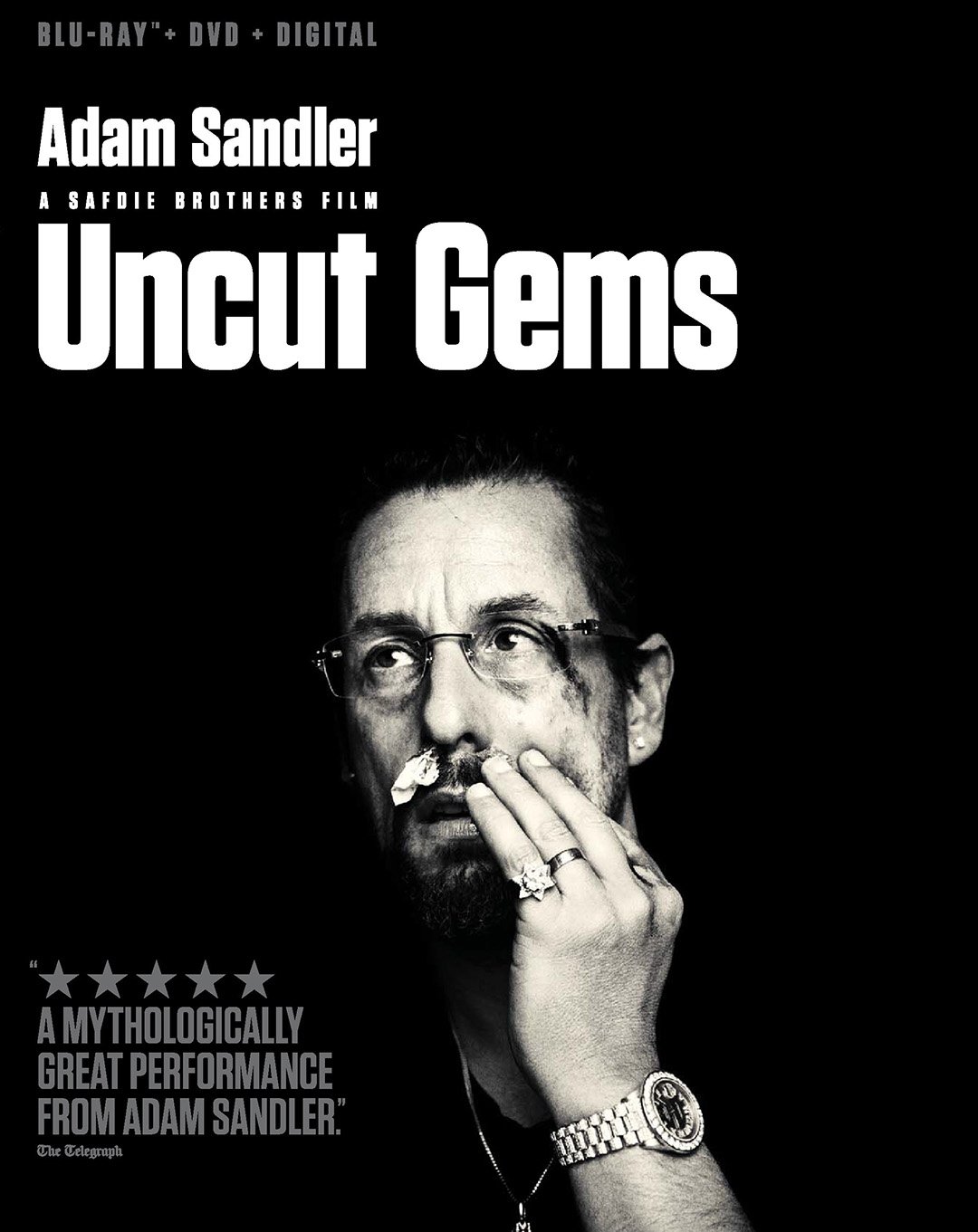 Adam Sandler is primarily known for his comedy roles. In this dark comedy movie, he plays Howard Ratner, a successful charismatic gems dealer whose gambling addiction puts him and his family into serious trouble. The narrative is about Ratner risking everything in placing a series of high-stakes bets in the hope of winning to pay his thousands of dollars in debts. This film is about gambling addiction’s real consequences and how it ruins people’s lives. Watch the movie to find out why “Everything I do is not going right”! 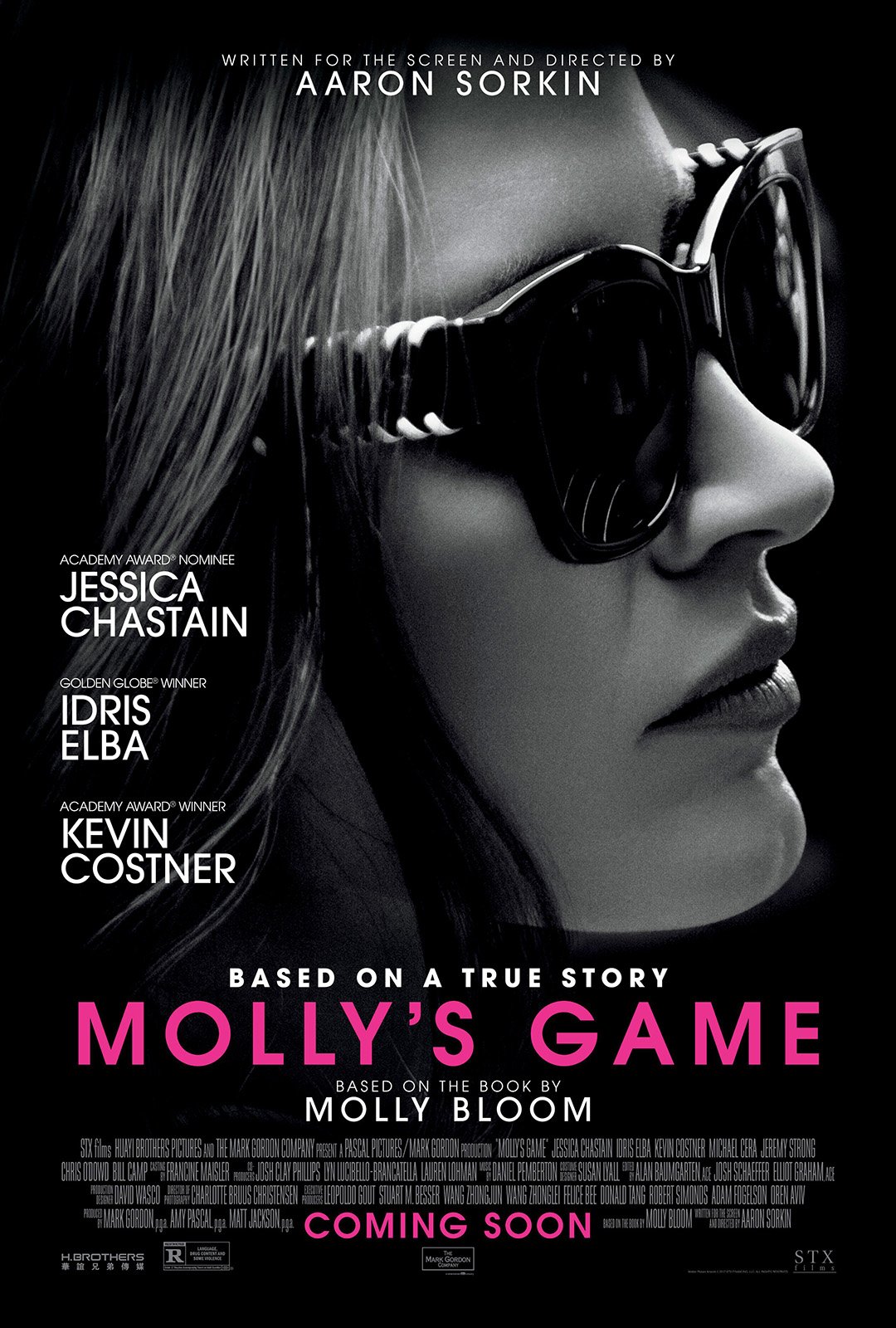 This movie is inspired by the true story of Molly Bloom’s life, played by academy award nominee Jessica Chastain. Molly is a beautiful, young, Olympic-class skier who became an FBI target. Molly played and won the world’s most exclusive high-stakes poker game for a decade before being arrested by FBI agents. Molly became an FBI target because of the underground poker empire she created for celebrities. While watching the movie, you will see lots of poker chips, beautiful women, and a loooot of money! Let’s not spoil it, watch the movie today if you have not watched it yet. 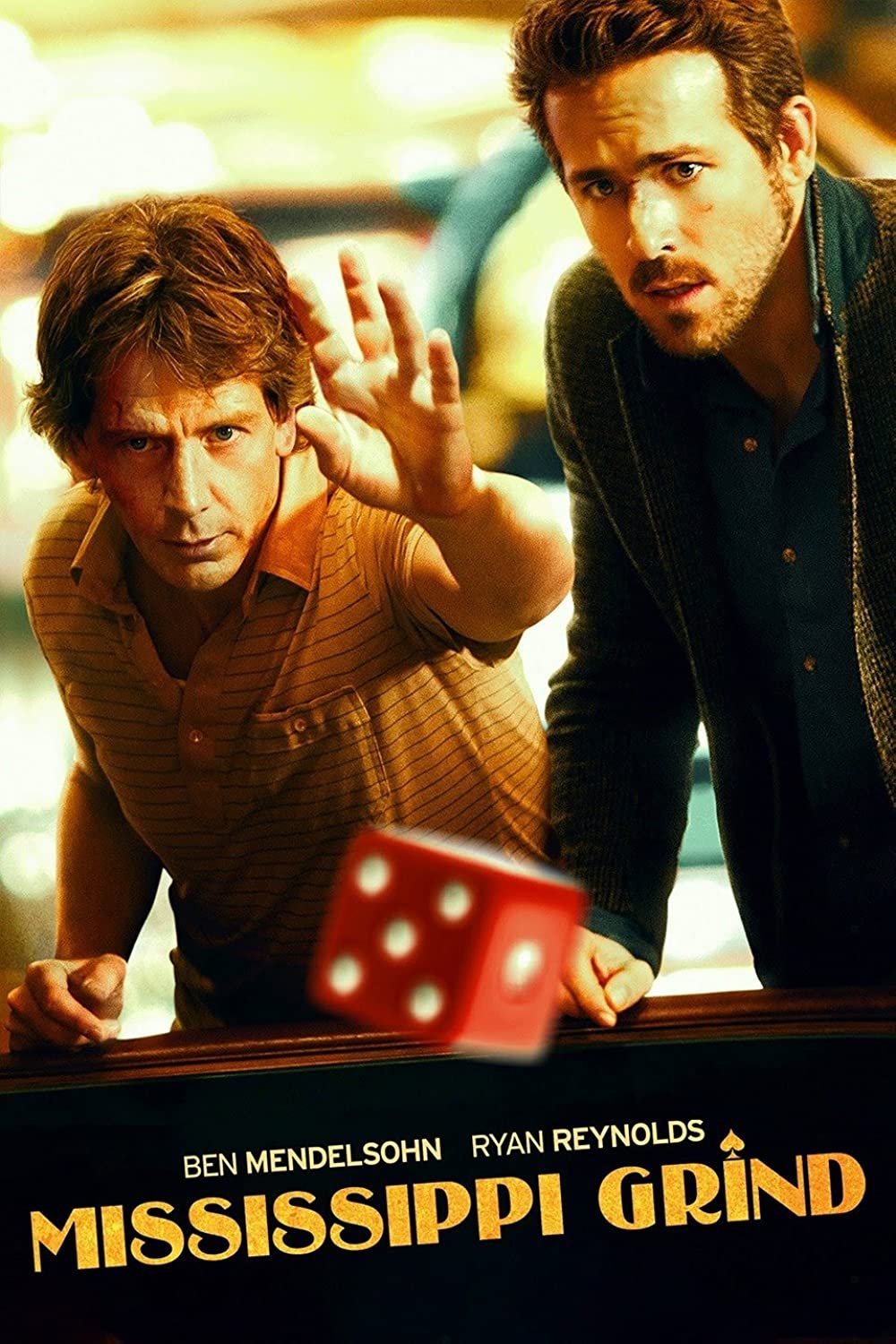 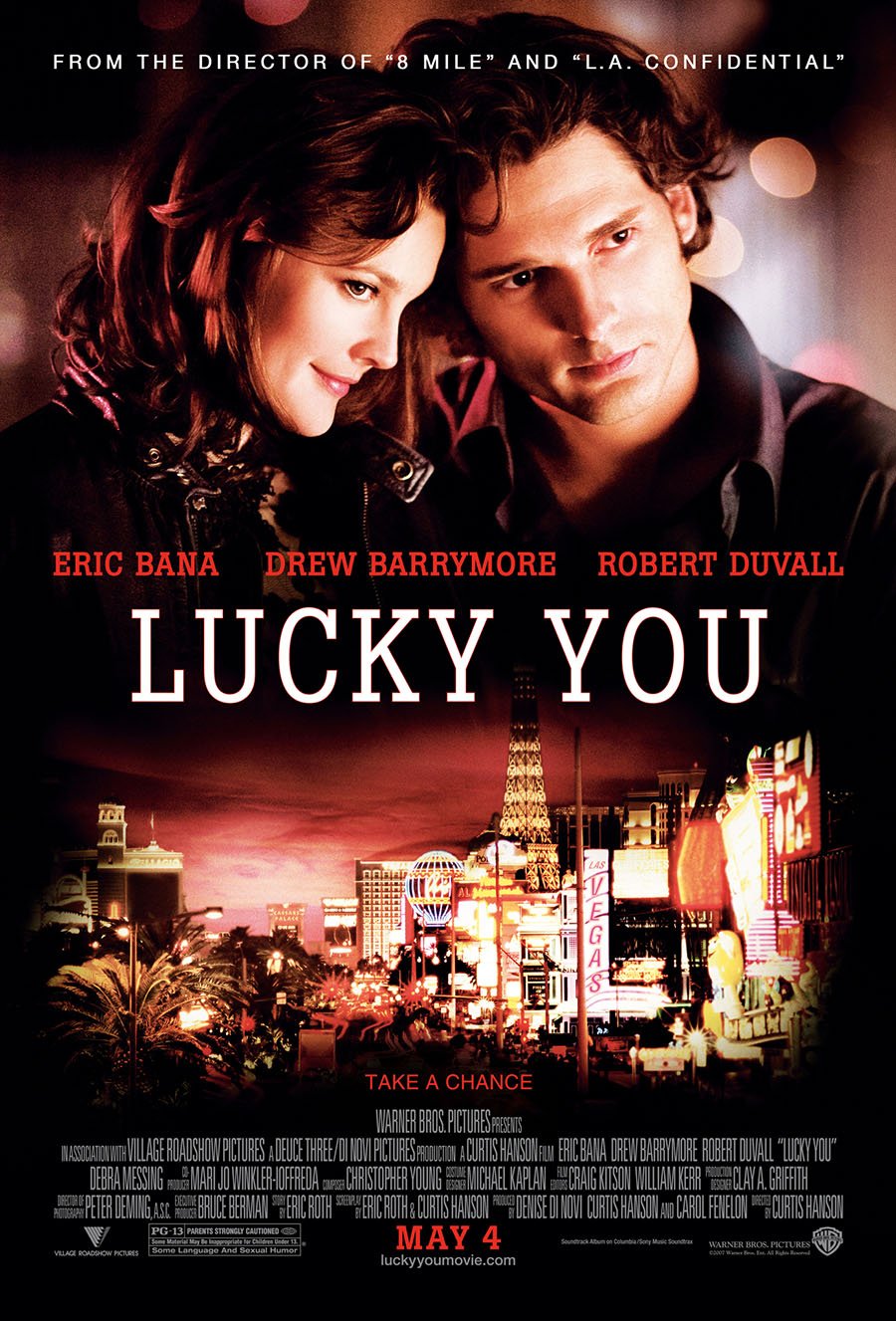 Romance lovers who happen to be poker fans, this film is for you. Lucky You is a love story in the middle of the poker table. Huck Cheever, played by Eric Bana, is a gifted young pro poker player who insanely loves Billie Offer, played by the beautiful Drew Barrymore. Huck wants to win a world championship in Vegas. However, his poker and love life are haunted by his relationship with his father, a poker legend who abandoned Huck’s mother years ago. The movie is about love, making difficult decisions, paradoxical feelings, and of course, poker. 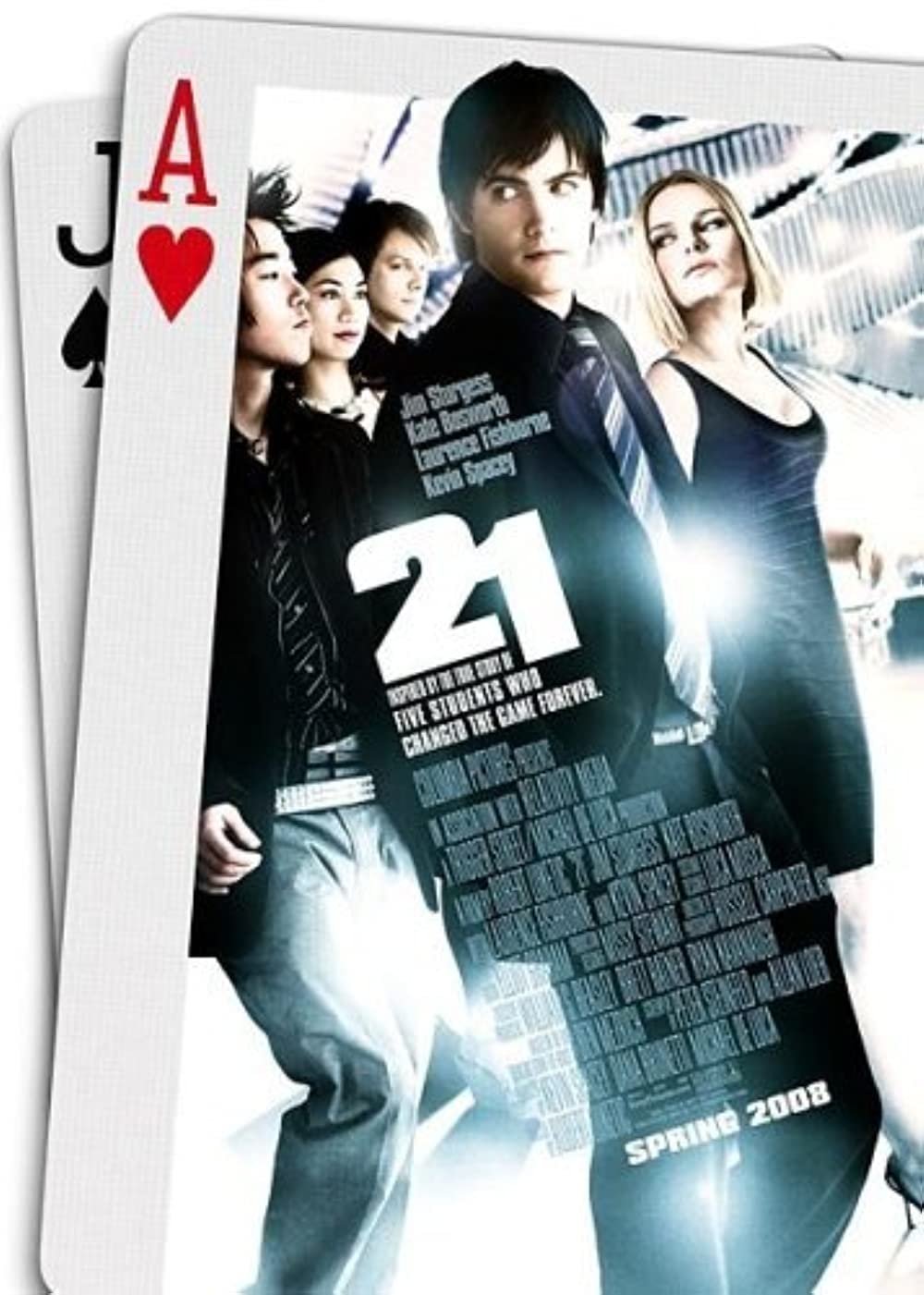 As the name and poster suggest, this movie is inspired by the true story of six MIT students who learn to count cards in blackjack to win big. Ben Campbell (played by Jim Sturgess) is a brilliant student who needs immediate cash to pay his tuition fee. For this reason, he joins a group of five other students trained by professor Mickey Rosa (played by the legend Kevin Spacey) to use their mathematical skills and talent to win big pots in Vegas casinos. They win millions of dollars in Vegas casinos. However, the ending is not a happily ever after for these talented students! 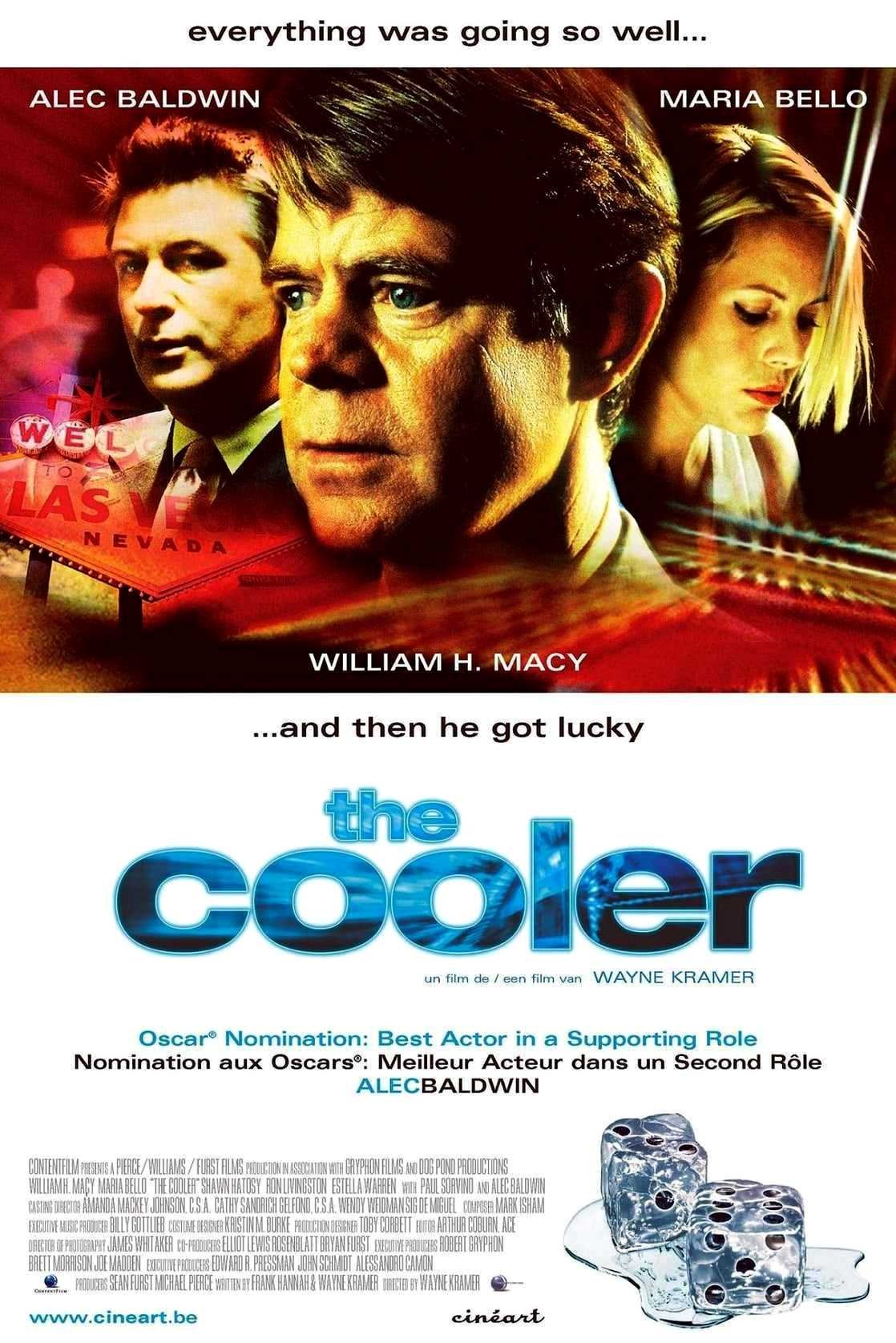 In an old-school Vegas casino-Shangri La-, a lonely single depressed casino worker named Bernie Lootz, played by William H. Macy, jinxes gamblers into losing. “Cooler” is an old-school concept of casinos. Coolers were professional unlucky people who brought bad luck and loss to gamblers. The movie is about Bernie Lootz, a cooler who breaks his curse when he falls in love with Natalie Belisario, played by Maria Bello. This is a movie about the miracle of love in a casino! 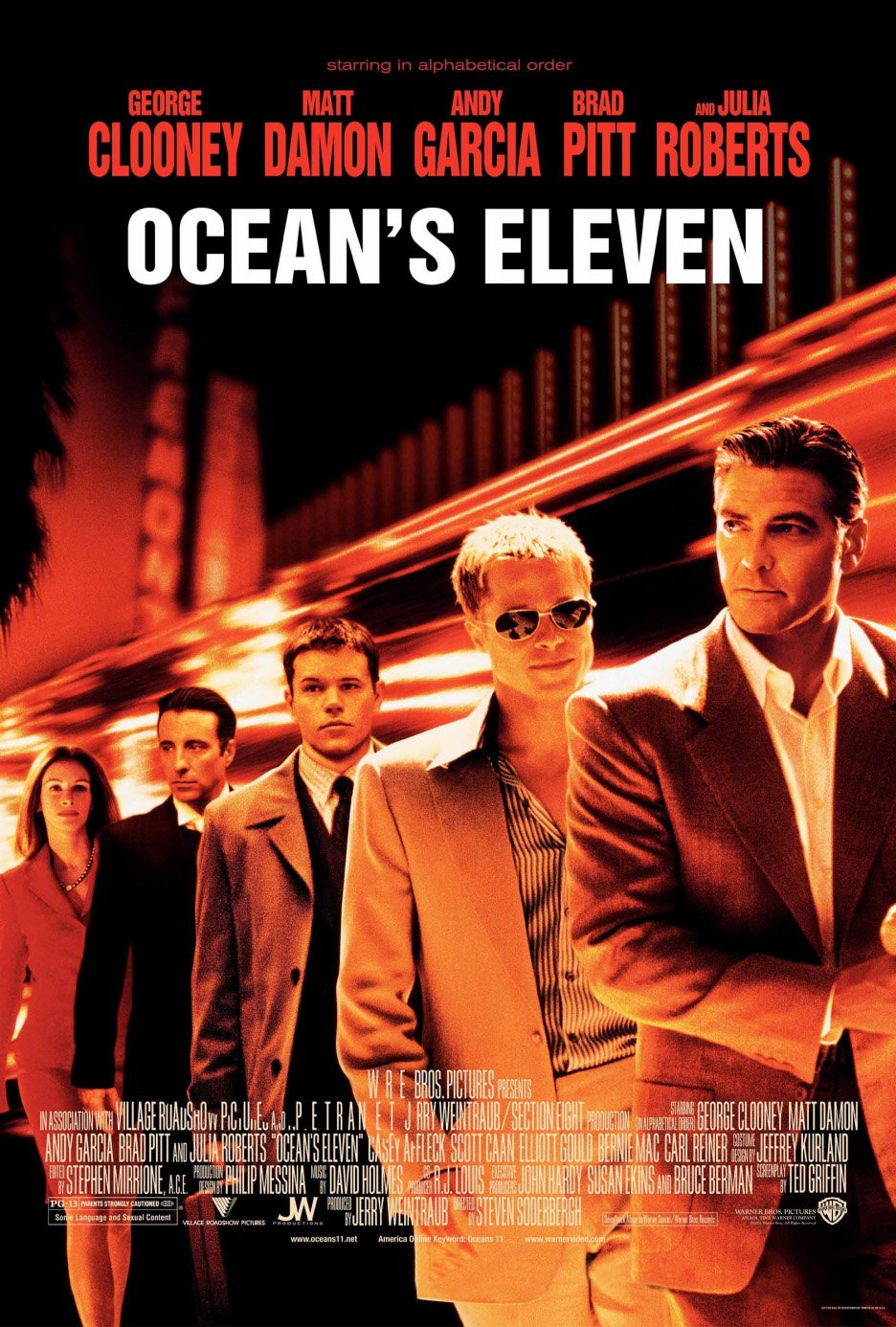 Ladies and gentlemen! Here we come to my all-time favorite casino and poker movie: Ocean’s trilogy. Of course, one reason for the success of this trilogy movie is its sexy and all-time handsome cast!! Do you know anyone who does not have a crush on George Clooney, Matt Damon, or Brad Pitt?! Apart from the sexiness of the cast, Ocean’s Eleven was a success because it mixed drama, love, crime, and comedy well. The trilogy is primarily about our charismatic, handsome thief, Dapper Danny Ocean(Played by prince dreamy George Clooney!!), who orchestrates the most complicated, elaborate, and spotless casino heist in history. Danny has three rules, and his crew follows these while robbing casinos! Don’t hurt anybody, don’t steal from anyone who doesn’t deserve it, and play the game like you’ve got nothing to lose. See? The guy is pretty disciplined😅. Danny combines an eleven-member team, including Frank Catton, Rusty Ryan, and Linus Caldwell, to rob the Bellagio, the Mirage, and the MGM Grand casinos owned by Terry Benedict (played by Andy Garcia). It’s not going to be easy, but our charismatic disciplined thief wants to score the biggest heist in history. Spoiler alert: they do it and walk away with $150 million. The movie is fun and adds elements of stress and mystery, making it a must-watch movie! You definitely watched it, but if you didn’t, head to Netflix and watch it today😉. 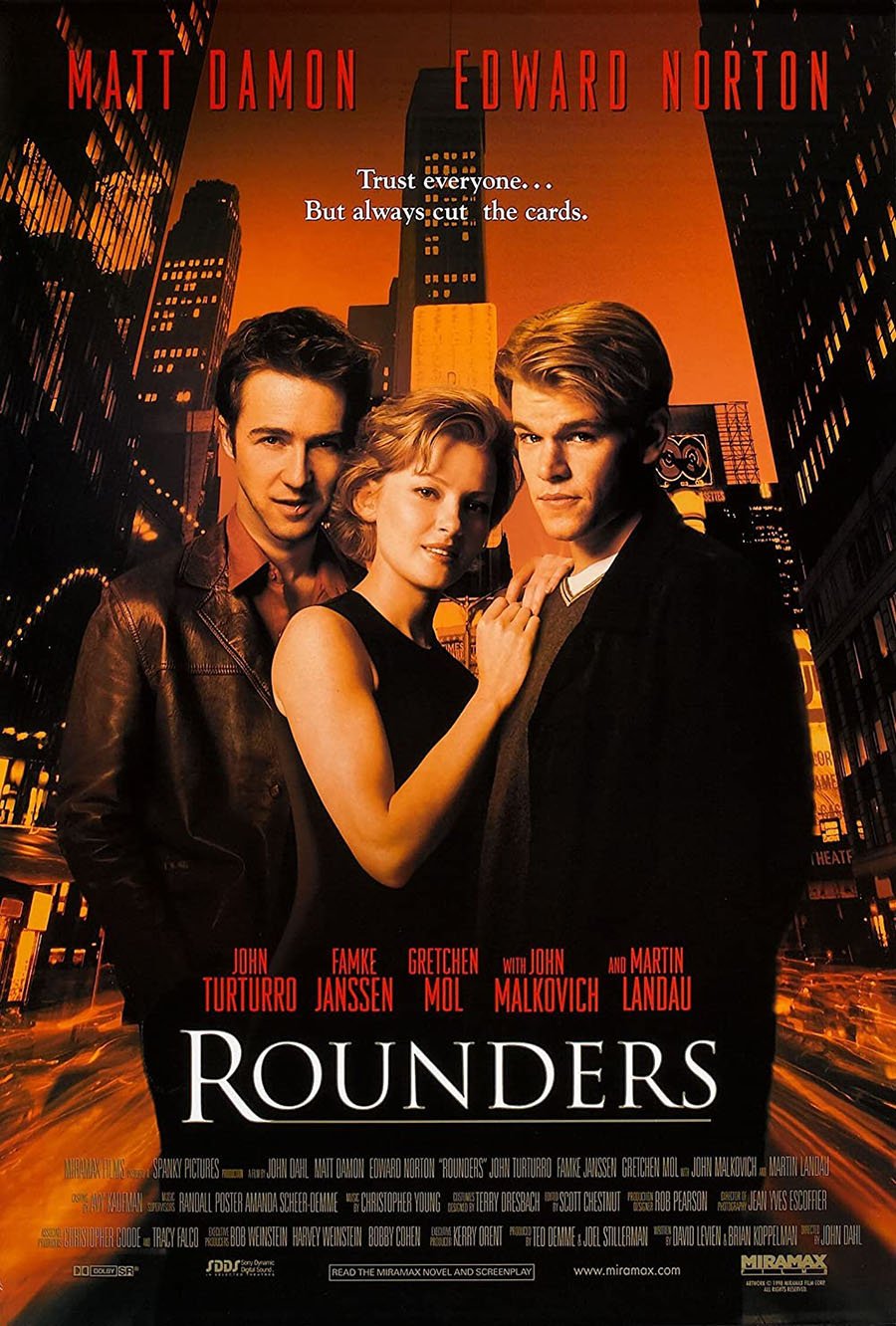 This is one of the most famous poker movies in the history of Hollywood. People know Matt Damon from his brilliant role in the Rounders movie. You likely watched it. Still, in case you didn’t, this is a narrative about a young, reformed gambler Mike McDermott(played by handsome Matt Damon), who loses all his money against a Russian gambler named Teddy KGB(played by John Malkovich). Mike’s girlfriend Jo (played by Gretchen Mol) makes him stop gambling. Mike’s friend, Worm(played by Edward Norton), comes out of prison, and has an old debt to pay. Mide decides to help him by coming back to high-stakes poker games. Mike finds out the debt is owed to Teddy and decides to face him and try to beat the old Russian opponent. 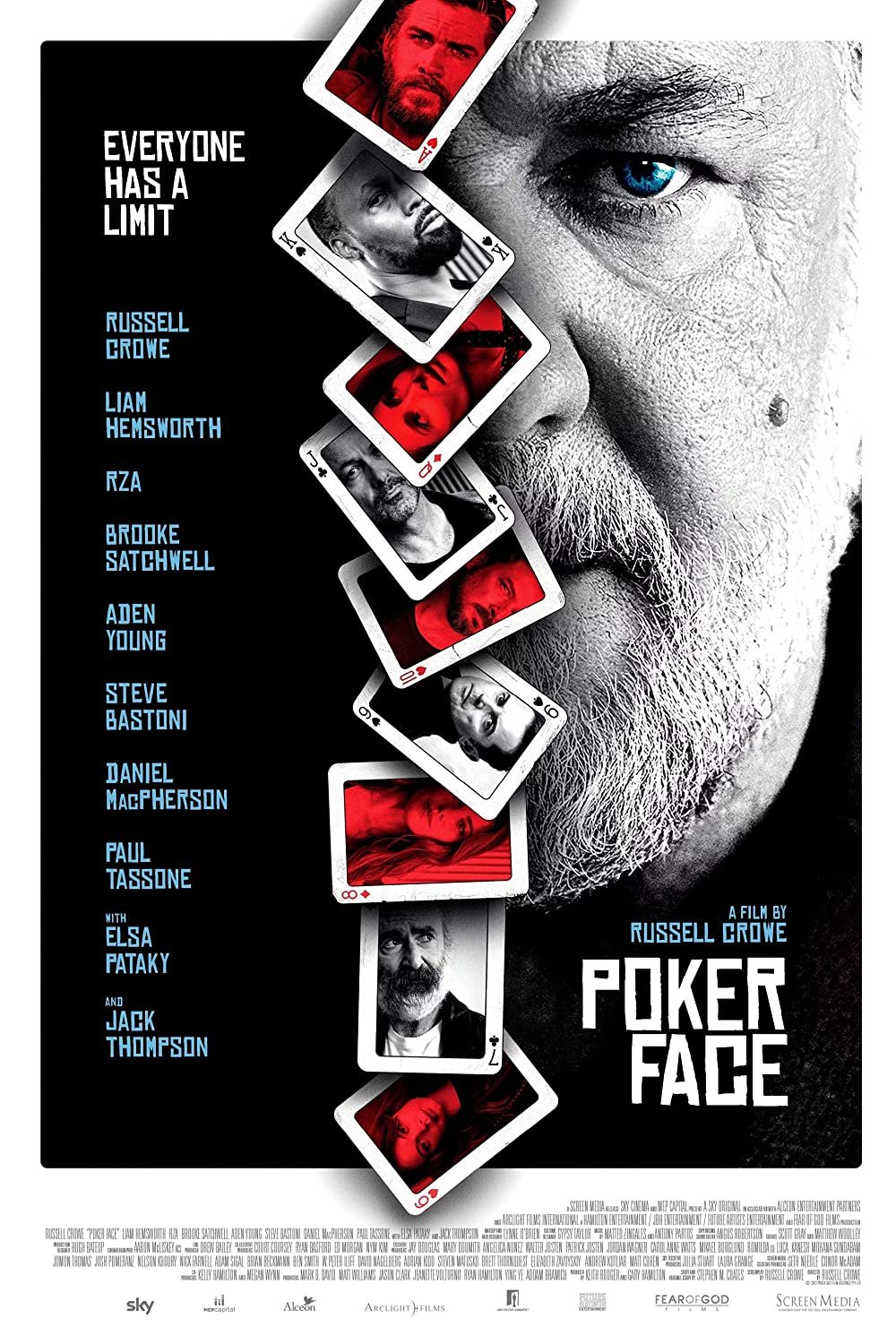 The latest movie about poker is directed by the legend Russell Crowe and was released on November 16, 2022. If you have not watched the movie, I suggest watching it now. By right now, I mean right after you finish this article!

The movie is about poker, but it shows how life is similar to the game of poker. It is a narrative about a tech millionaire, Jake Foley, a poker player by nature who loves to play any kind of poker. Jake(Russell Crowe) invites his best friends to his home for a moment of truth to play a high-stakes Texas Hold ’em. But things get awry as a killer thief invades Jake’s home.

I don’t want to spoil it but let me finish with my favorite quote from the movie:

Life is just a game, right? It’s all in how you read and respond to your opponents. You watch how they bet, how much they bet. Everything they do informs you more. If luck is leaving you, apply what you can to change its motion. 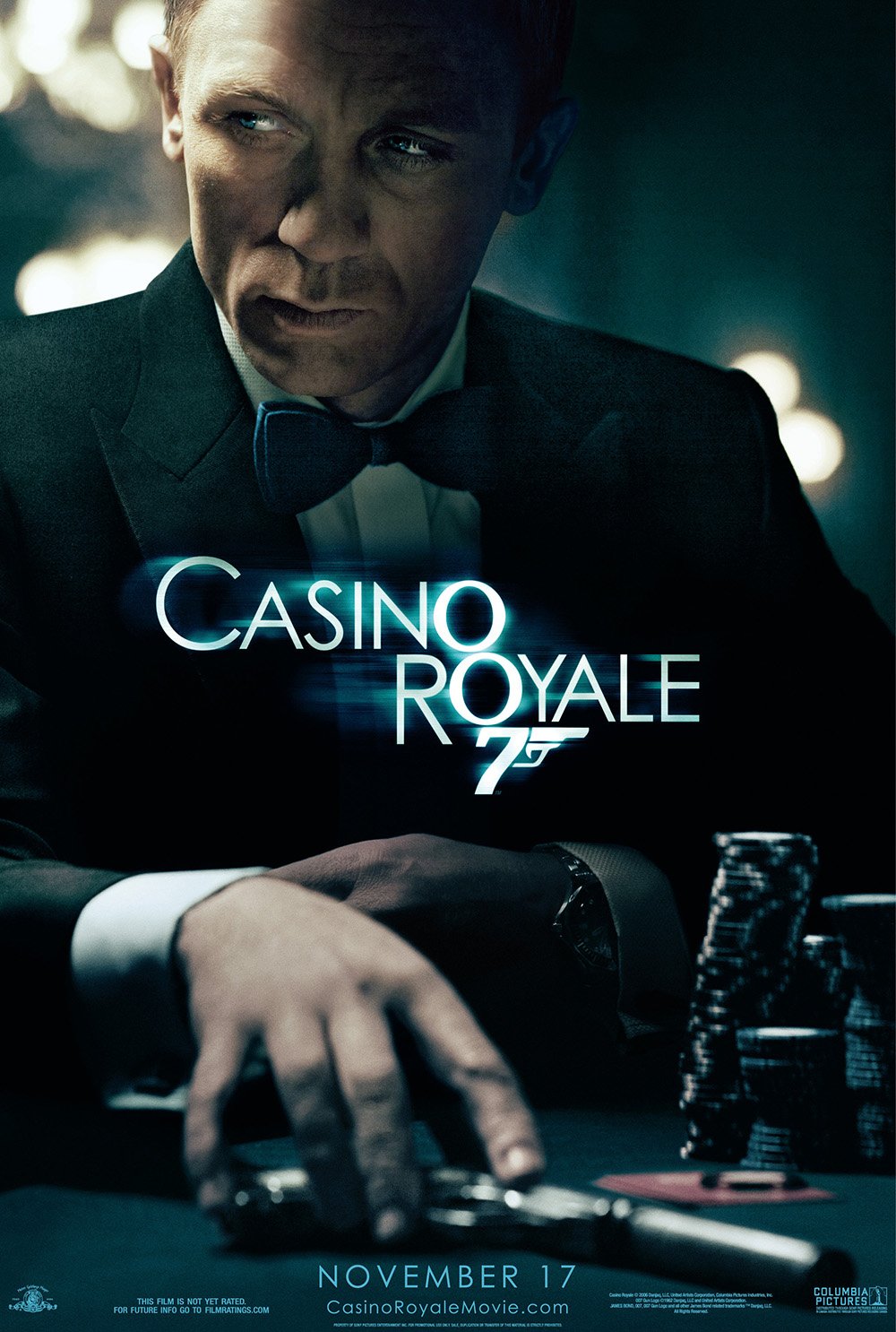 James Bond fans must have watched this movie. Casino and poker are inseparable elements of James Bond movies. Casino Royale is about James Bond’s(Daniel Craig) first mission as 007 agent. His mission is to beat a private banker funding terrorists in a high-stakes poker game at Casino Royale, Montenegro. The movie won 1 BAFTA Award, 27 wins, and a total of 44 nominations. 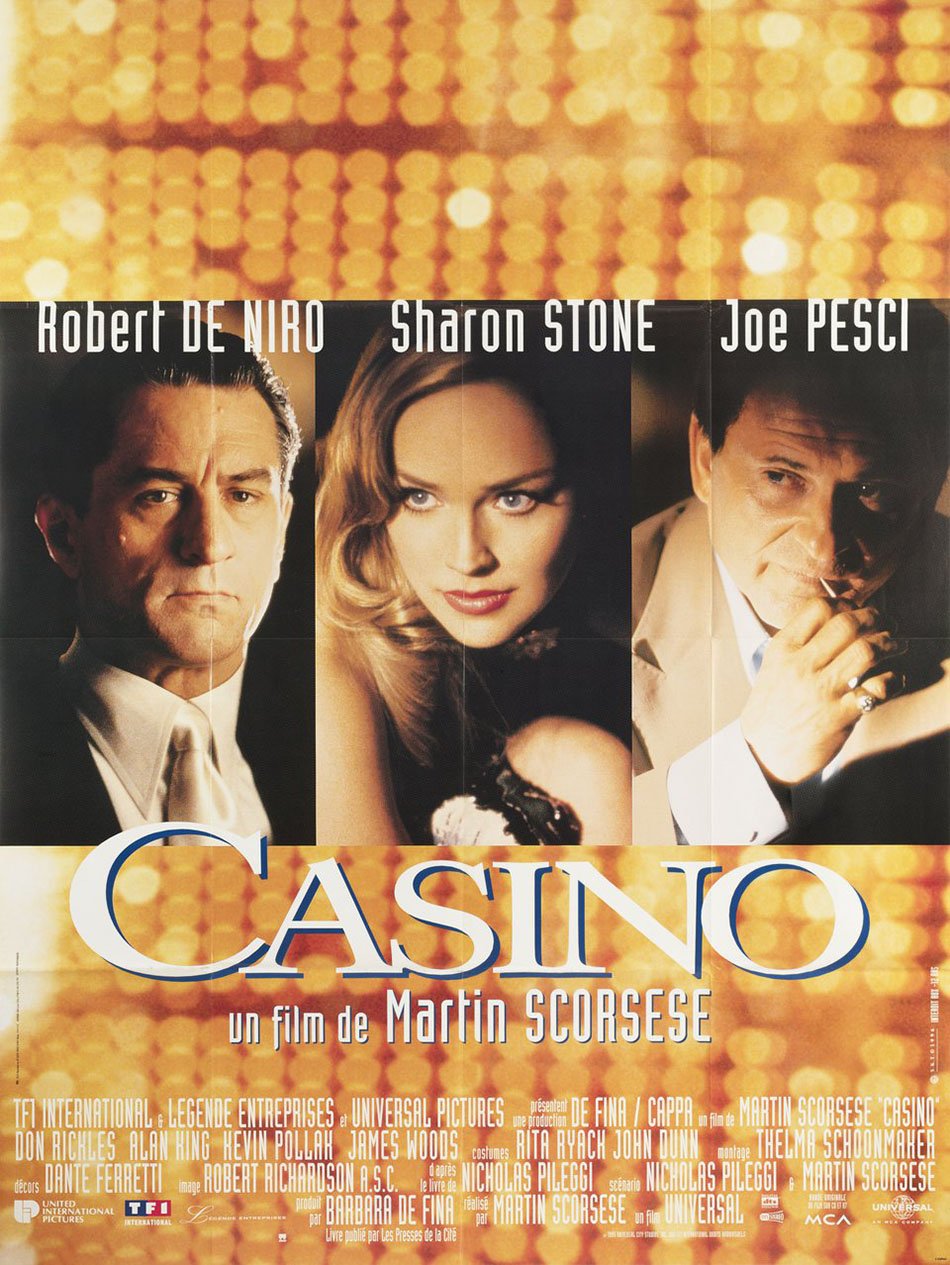 It is a classic American crime epic movie involving greed, deception, money, power, and murder. Casino is a narrative of two best friends: a mafia enforcer(Sam) and a casino executive(Nicky), who compete against each other over a gambling empire and a love story. The legend Robert De Niro plays Sam ‘Ace’ Rothstein, another unforgettable role he played. The movie was nominated for 1 Oscar Award, four wins, and a total of 11 nominations.

I summarized the best poker movies on IMDb and the history of Hollywood. These are the best dramas with the element of poker you can watch. These movies show how poker shapes real lives. If you have not watched any of the movies on this list, I highly recommend watching them.