Home » Who Is The Most Popular Slot Player On YouTube?
Games

Thanks to technological advancements, the world of slot games is more colorful than ever. Even people who have never played a slot machine before(which is very unlikely!) can quickly get into the business using tons of readily available resources like Youtube slot channels. Some slot players film themselves while playing a slot machine and show you how the machine works, the bonuses, and which online games are the best to play. They even share their experiences while playing on land-based casino slot machines. For this reason, slot players’ youtube channels are the best way to learn about the latest online and land-based slot games, work with different machines, learn the best slot betting strategies, and more. This is why I put together this article for you to know everything about youtube’s most popular slot players. All the slot influencers on this page are real and legitimate users. They are not among those who post fake videos to garner views.

Professional and seasoned slot players film themselves while playing real slot games online or at land-based casinos. They create a youtube channel and upload their videos to attract slot fans to view their videos and subscribe to their channels. Although their primary motivation is the love of slots, the more they attract viewers and subscribers, the more money they can make from their youtube channel.

Every month thousands of slot players upload such videos, but the popularity of their channels varies. Not to mention that not all of them are real and legitimate users. Below you will read about the top 5 famous slot machine players on youtube. 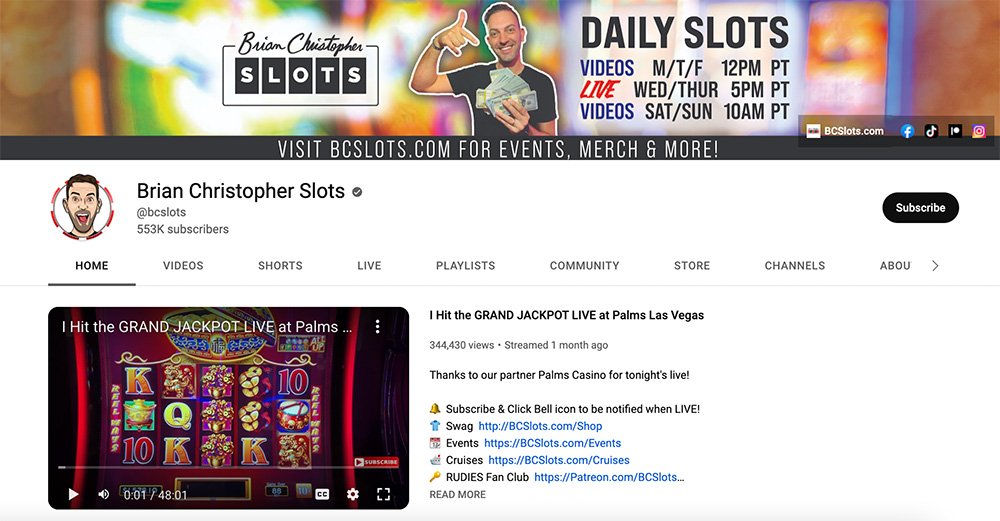 Without a doubt, this guy👆 owns the most popular youtube slot channel. Brian Christopher is from Canada and lives in the United States. Brian’s slot channel receives more than 500k views daily, more than 20 million per month, and over 390 million total views.

Brian’s youtube channel is one of the oldest. He joined youtube on Jun 17, 2006. At first, it was all for fun, and he posted videos as a hobby. However, he made Youtube slots into a full job after his viewers and subscribers increased exponentially. Brian Christopher’s youtube slot channel is expected to be worth more than $3 million in 2022.

Brian’s youtube channel is both educative and entertaining. His playlist includes various videos, including different slot games, casinos, and betting limits. Better yet, he is a live stream fan, making him relevant to today’s fan base. His live streams are every Wednesday and Thursday at 5pmPT / 8pmET. Brian shoots his videos in Las Vegas, Southern California, and other locations. He gives a heads-up to his fans on which casino he will be going to on a calendar so followers can meet him in person if they are willing to.

The reason behind Brian’s slot channel popularity is the fact that he makes fun, entertaining, and informative videos. People enjoy watching him spin the reels, win or lose. He is funny, charismatic, and a great speaker. He bets all the way from $1 to $100 per spin. He occasionally hosts guests like other popular youtube gambling influencers, real celebrities, and famous slot players on youtube. 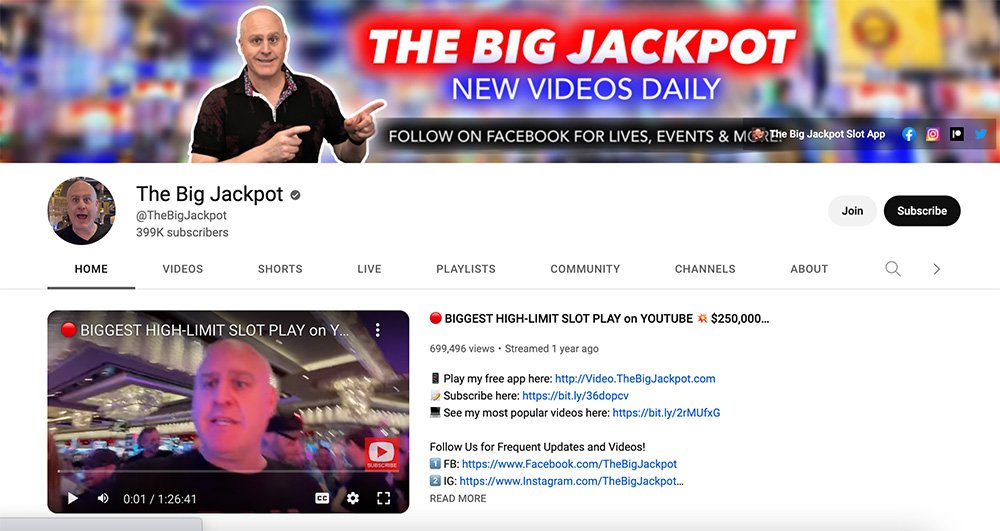 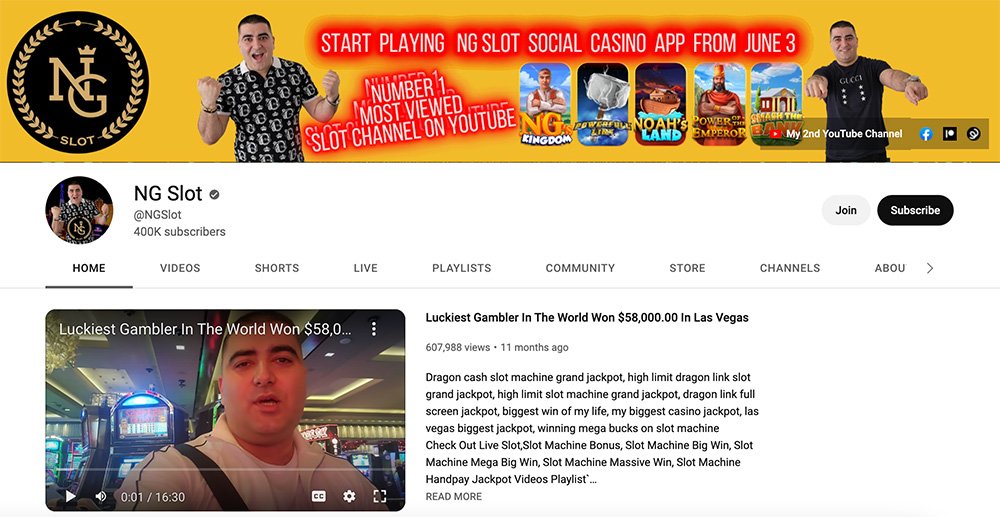 This channel is owned and run by Narek Gharibyan from the US, a famous slot Youtuber listed among the world’s most popular casino gamers and vloggers. Narek owns another youtube channel, Having Fun With NG Slot, with more than 15k subscribers. The guy gained enormous success and popularity from casino vlogging.

NG Slot youtube channel was created on Feb 17, 2017, and so far has received more than 359 million total views. Narek mainly posts videos of himself playing slot machines and shares his real-life experiences at various land-based casinos. You will watch daily average betting videos and a few high-limit betting videos on this channel. NG Slot youtube channel’s net worth is expected to be around $1.8 million.

Although Narek does not like to share his personal life with the public, we know he is a 35-year married man and a father to three children. His success on youtube is thanks to the video entitled Buffalo Grand Slot Machine Live Play Max Bet. This video went viral and received 11k viewers at the time. 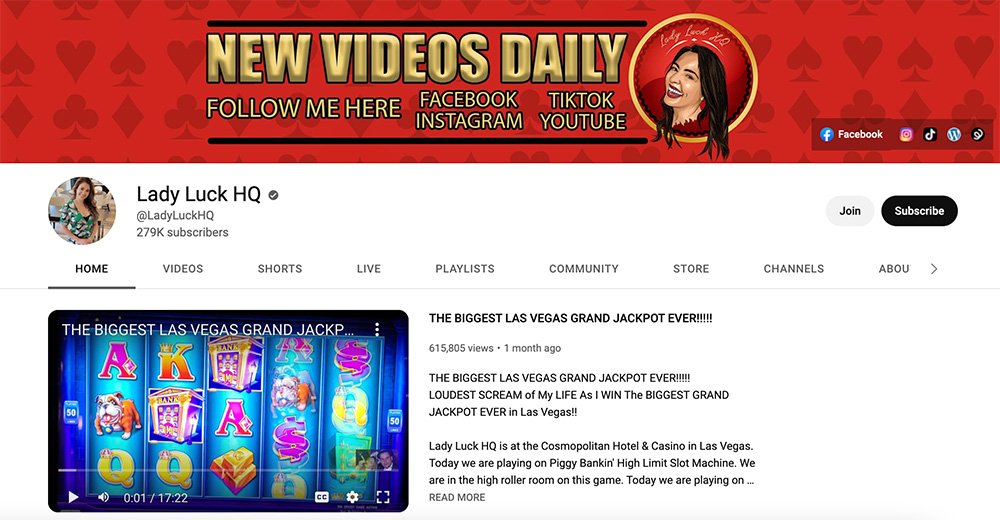 This channel is owned and run by a couple;  Francine Maric and her husband, Miran. The couple is better known as Lady Luck HQ. They are high rollers and share their high-limit slot adventures on their videos. Lady Luck HQ videos are mainly narratives of Francine and her husband casino adventures. They created the channel on Feb 26, 2018, and received a total of 161,432,736 views over four years. According to her IG page, Lady Luck HQ is the most viewed female youtube slot channel in the whole world! They post daily videos, and their channel’s net worth in 2022 is expected to be $1.5 million. 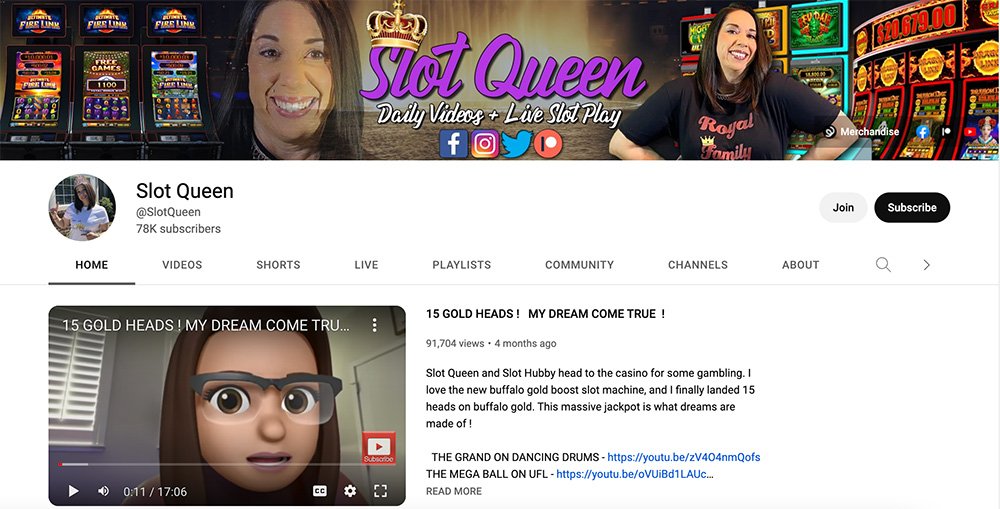 The Slot Queen youtube channel is owned and run by Danielle Aragon, a mom from Northern California. She is married to her sweet husband, who she calls Slot Hubby. They co-film some of their slot adventures. In fact, this is a family slot channel where Danielle shares personal and real-life slot plays, including wins and losses. The Slot Queen usually goes live on Thursday and Friday nights. She joined youtube on Aug 24, 2017, and so far received a total view of 40,863,426. Subscribers and viewers love Slot queen because she is so real! She does not fake feelings while playing slots, regardless of whether she wins or loses. Her channel net worth in 2022 is expected to be more than $1 million.

Youtube is full of colorful slot channels run by slot influencers. However, not all of them are famous. I introduced the top five best slot machine youtube channels. They are all owned by legitimate and real slot players. Although Brian Christopher is the most famous and influential youtube slot player, the other four are pretty fun to watch. Depending on your betting taste, each channel will teach you something new about slots.